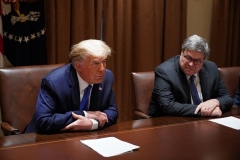 (CNSNews.com) - President Trump has joined House Republicans in their call for a special prosecutor to look into emails found on Hunter Biden's laptop that was abandoned at a Delaware repair shop.

"We've got to get the attorney general to act. He's got to act," Trump told "Fox & Friends" on Tuesday morning. "And he's got to act fast. He's got to appoint somebody. This is major corruption, and this has to be known about before the election."

The New York Post reported last week that emails found on Hunter's computer indicate he was cashing in on his father's position as vice president.

One email says that Joe Biden did meet with a Ukrainian oligarch, a meeting arranged by his son, despite Joe Biden's denials that he had done so. And other emails suggest that Hunter may have planned to bring his father -- "the big guy" -- into a lucrative deal with a Chinese energy firm.

"They say this is the laptop from hell," Trump told "Fox & Friends."

They say right in the laptop that, you know, the big man has to get 10 percent, and then in another case they say 50 percent....And even if he didn't get, and he does get -- and he lives like a king. Even if he didn't get all of this money -- and everybody has known this in Washington for a long time. This isn't surprising, nobody's surprised by this.

It's disgraceful what's happening, and the media refuses to cover it...

Trump said even if Joe Biden didn’t get ten percent of the equity in the unspecified China deal – “Even if it wasn’t, you can't go, and go with your father and every stop you make you pick up a billion dollars. You can't do that. You can't do it.

“But he got a kickback. You know, in the old days they used to call it a kickback. But there's no better word. The vice president got a kickback, and everybody knows it, and they've known it for a long time.”

“These alleged revelations raise serious questions about former Vice President Joe Biden’s reported participation with his son’s business, dealings, specifically whether the former vice president (1) received foreign monies during his tenure in the Obama administration and (2) if former Vice President Biden allowed his son to peddle access to his father with foreign business entities,” the letter, obtained by Fox News, says.