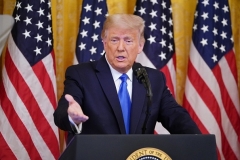 Schumer spoke after Trump was asked a "gotcha" question about a "peaceful transferral (sic) of power" at a White House news conference.

In recent weeks, Democrats and their media allies have floated the idea that President Trump -- whom they label a "dictator" -- will not leave the White House if he loses the election, but will stay put while challenging the election results.

In response to the question on Wednesday, Trump said, "There won't be a transfer, frankly. There will be a continuation." In other words, he expects to win re-election.

Here is the question presented to Trump, his response, then Schumer's comments, in context:

Reporter: "Mr. President, real quickly, win, lose or draw in this election, will you commit here today for a peaceful transferal of power after the election? And there has been rioting in Louisville, there's been rioting in many cities across this country, red and--your so-called red and blue states -- will you commit to making sure that there is a peaceful transferral of power after the election?"

Trump: "Well, We're going to have to see what happens, you know that. I have been complaining very strongly about the ballots, and the ballots are a disaster and--"

Reporter interrupts: "I understand that, but people are rioting. Do you commit to making sure that there's a peaceful transferal of power?"

(The reporter kept pressing the president as Trump called on some else. "Go ahead. Please go ahead. Yes, go ahead. You asked a question. Go ahead, please," Trump said, trying to get the "peaceful transferral" reporter off his back.)

"Erin, President Trump is not a dictator, and the American people will not allow him to be one," Schumer said. "This man has no -- no honesty, honor, values or faith in the American system. He doesn't deserve to be president. And hopefully he will learn his lesson."

Burnett noted that military leaders have said they don't see U.S. troops playing a role in ousting the president if the election outcome is disputed. "How do you see this playing out?" she asked Schumer.

Well, the way I see it playing out is, the American people are wedded to democracy. We believe in democracy. And the kind of thing Trump is talking about (vote fraud) just will not happen.

One way or another, there'll be a peaceful transition of power, and President Trump will not get his wish. One thing I'd say to the American people --vote, vote early, and the best way to prevent Donald Trump from messing around in the election is defeat him in a landslide, and that's what I hope will happen. It certainly should, given the kinds of things he said.