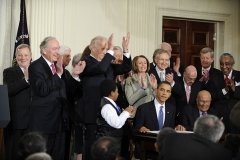 (CNSNews.com) - President Donald Trump told a news conference on Sunday he believes Judge Amy Coney Barrett "is going to move on the law" and be a "great justice for many years to come," regardless of what issues come before the court.

As Democrats, including House Speaker Nancy Pelosi, warn that Trump appointed Barrett to overturn Obamacare, Trump indicated that would be just fine with him.

Obamacare is terrible. It doesn't work. We've made the best of it. We got rid of the individual mandate, which is great.

On the other hand, if the court rules against, we will manage the system better. But don't forget, we've already essentially gotten rid of Obamacare, because we got rid of the individual mandate, and it was all based on that.

So we've done a tremendous amount, because the individual mandate was the most unpopular aspect. You had to pay a lot of money for the privilege of not paying for bad health care.

So that was a terrible thing for people, and what we will do is, if we are fortunate enough to get rid of the little remaining in Obamacare, and again, individual mandate, what have you, that's no longer Obamacare, because that was the central point and we won that. We already won that, as you know.

But by getting rid of that, it's different. It's a much different thing.

The other thing we've done is manage -- Here's the story. It's no good. It's too expensive. It's bad coverage. You don’t get your doctor, you don't get your plan. All of the things that President Obama said, you don't get, and Biden, too, by the way, if Biden even-- I don’t think he has any understanding of it.

Also See:
Pelosi Knows How SCOTUS Will Rule? 'If You Have a Preexisting Medial Condition, That Benefit Will Be Gone'