Trump: No Deal with Democrats 'Means You Can't Have Universal Mail-In Voting' 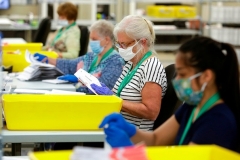 (CNSNews.com) - The Democrats' Heroes Act includes $25 billion to shore up the failing the United States Postal Service, as well as an additional $3.6 billion for states to expand vote-by mail, early voting, and online/same day voter registration, among other provisions.

In an interview with Fox Business anchor Maria Bartiromo on Thursday, President Donald Trump rejected both items, saying they are just two of many sticking points in the negotiations over another COVID relief package.

"If they don't get those two items, that means you can't have universal mail-in voting," Trump said.

You know, there's nothing wrong with getting out and voting. You just get out and vote. They voted during World War I and World War II, and they should have voter ID because the Democrats scammed the system. But two of the items are the post office and the 3-and-a-half billion dollars for mail-in voting.

President Trump objects to the kind of mail-in voting where ballots are automatically mailed to registered voters. The Democrats' bill would send a ballot to every registered voter, postage paid.

Trump says this leads to fraud. And the already-strapped postal service is not equipped to deal with millions of ballots returned by mail in a short period of time.

Trump noted that California is "sending out tens of millions of ballots. They have no idea where they're going, or maybe they do. Maybe they'll go to everybody but Republicans."

Trump mentioned that his administration is now challenging Nevada’s vote-by-mail plan in court.

Currently, voters in only five states -- Colorado, Hawaii, Oregon, Utah, and Washington -- receive a mail-in ballot by default, although in-person voting is also available. But the coronavirus pandemic has prompted a number of other states, including California, to adopt temporary mail-in voting.

“This will be the greatest fraud in history,” Trump warned. This will be almost as fraudulent as Obama spying on my campaign, but not quite.”

The Democrat bill would allow voters to present a sworn signature -- a written statement attesting to their identity -- instead of showing a driver's license or other ID to vote in federal elections.

Trump called voter ID "the greatest thing there is."

“Everybody knows it. Some states like Indiana, some very well-run states have it, but many don't, and the Democrats are fighting it tooth and nail because they cheat. There's only one reason to fight it. They cheat.”