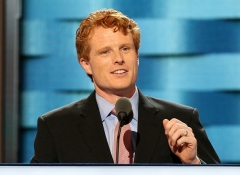 (CNSNews.com) - As he often does, President Donald Trump began his day with a tweet: "See, even a Kennedy isn’t safe in the new Radical Left Democrat Party. Taxes up big, no 2A. Biden has completely lost control. Pelosi strongly backed the loser!"

The loser in this case is Democrat Rep. Joseph P. Kennedy III, who was soundly trounced in Massachusetts' U.S. Senate primary by the incumbent Democrat Sen. Ed Markey.

Markey easily won with around 55 percent of the vote, to Kennedy's 45 percent.

As The New York Times put it, this was the "first-ever electoral loss in Massachusetts" for the Kennedy family, "demonstrating the growing strength of the progressive left."

Markey, 74, joined Rep. Alexandria Ocasio-Cortez (D-N.Y.) in introducing a Green New Deal resolution in February 2017. Markey is among those who say we may have as few as 12 years to avoid the worst impacts of climate change.

And Markey talked about that in his victory speech Tuesday night, saying the climate crisis is “the  one issue...which defines our future.”

Every other problem is linked to it. No solution to any challenge will be successful unless we address it.

There will be no peace, no justice, and no prosperity unless we stop the march to climate destruction. This is a matter of life and death. The very future of our civilization depends upon it.

According to Politico, which posted an in-depth look at the Kennedy legacy on Wednesday:

Kennedy, his advisers and many other people underestimated Markey’s vitality, campaign skills and, especially, his sense of determination. Being put out to pasture by a Kennedy seemed to him the greatest affront, the height of indignity, and he made others see it that way, too. Soon, Markey was appearing in ads shooting baskets with a panther-like agility that Donald Trump and Joe Biden could only dream of; in recognition of Markey’s decades of support for clean energy, none other than Ocasio-Cortez offered her endorsement, cementing Markey’s position to Kennedy’s left—the key to a huge trove of votes in a Massachusetts Democratic primary.

The Kennedy dynasty is dead. Joe’s Senate loss places a 2020 marker on its gravestone. Yet no one should be more relieved than the Kennedys. Now they are free to be themselves and discover their own ways to make a contribution.

(As for the end of the Kennedy dynasty, let's not forget that Caroline Kennedy appeared via video with her son Jack Schlossberg on the second night of the 2020 Democratic National Convention, both of them praising Joe Biden's longtime public service.)