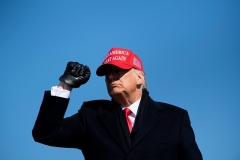 Susan Wright, endorsed by former President Donald Trump, will now advance to a runoff with fellow Republican Jake Ellzey, who received 13.85 percent of the vote to Wright's 19.21 percent. A runoff is necessary because none of the 23 candidates in Saturday's race received at least 50 percent of the vote.

Three of the top five vote-getters were Republicans.

One of the eleven GOP candidates, Michael Wood, ran on an anti-Trump platform. He received only 3.19 percent of the vote.

In his concession speech, Wood reflected the split in the Republican Party, writing in part:

I am gravely concerned about the state of the Republican Party. Let me be clear: this is not because I lost an election. I am concerned because a Republican President of the United States lied to the American people, took advantage of his supporters’ noble patriotism, encouraged a mob to disrupt the lawful operations of the United States Congress, was derelict in his duty as commander-in-chief to put an end to this insurrection – and then the overwhelming majority of elected Republicans in Congress failed to show the courage this moment required. Republican members of Congress then voted to overturn an election and attempted to disenfranchise millions of Americans. The events of January 6, 2021 are a stain on America. The failures of Republicans in the weeks that followed are a stain on the party of Abraham Lincoln...

...The easiest thing to be in American political life is a Republican who criticizes the Republican Party. This is not how I wanted to enter the political arena. However, my fellow Republicans, there is a sickness in our party that must be acknowledged and addressed. We are too much a cult of personality and a vehicle for the grievances of Donald Trump. We are too comfortable with conspiracy theories. We spend too much time and effort making it difficult for people to vote under the banner of “election integrity” instead of building a broader coalition, and asking ourselves why we have only won the presidential popular vote twice in my lifetime. We minimize and excuse an attack on the heart of our democracy. In short, we are making it hard for good people to call themselves Republicans. I do not primarily blame the people for this any more than I would blame a private for losing a war. This is mainly the fault of elected Republican leaders…

Wood also thanked Rep. Adam Kinzinger of Illinois, another anti-Trumper, for his support.

Earlier this year, Kinzinger launched the "Country First" political action committee, which he described as a "home for Americans who put Principles over Party and are tired of the poisonous extremism that has overtaken our politics."