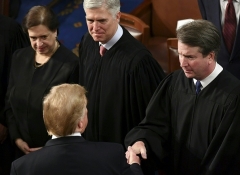 (CNSNews.com) - President Donald Trump told the Republican National Convention on Monday that Democrat Joe Biden should do what Trump did in 2016: Name the people he would consider appointing to the U.S. Supreme Court.

I'm saying that I'm--I'm demanding, actually, a list. Let Biden put up a list of the judges he's going to appoint that he'll take them out, like I did. I had 25, and we're going to take it out of that list. And we're going to be announcing a list over the next couple of weeks with the judges that we had, plus we might add a few more, so you know exactly where we stand.

He can't do it because he's--he would appoint--it's not him. He has no choice. The radical left will demand that he appoints super-radical, left, wild, crazy justices going into the Supreme Court. Your American dream will be dead if that happens. It'll be dead.

And, the next--and by the way, the next president--so, I've had two (Supreme Court appointments). Some presidents have had none, you know. I have had two in a relatively short period of time.

Trump noted that during his first term, he will have appointed three hundred lower-court judges. He called it an "unheard of number."

That's because President Obama was very nice, and he gave me 142 openings. And historically--historically you get no open-- When you become President, first question -- you say, how many judges? They'll say, ‘None, sir.’ Because the other previous president they want to--you know--it's a very important thing, federal judges.

So I've appointed--we will have appointed 300, could be even more than that by the end of the first term.

And I sat down. I said--first day, I said how many judges do I get to appoint? They said Sir, 142. I said, "one hundred-- because you know what? He thought that Hillary was going to win, right? And, the Republicans did not make it easy, let's say, but, you know, if you have enough time, there's not much anybody can do about it.

We ended up with 142 judges and then we've added many, many, and we're going to end up with 302 great Supreme Court Justices.