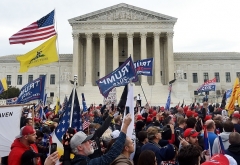 Trump supporters protest problems with the 2020 presidential election in front of the US Supreme Court on December 12, 2020. (Photo by OLIVIER DOULIERY/AFP via Getty Images)

(CNSNews.com) - "I don't know what else we could have done, other than ask the court to at least hear our arguments," a disappointed Texas Attorney General Ken Paxton told "Sunday Morning Futures" with Maria Bartiromo.

He spoke two days after the U.S. Supreme Court refused to hear the election challenge brought by Texas, then joined by six other states.

On Friday evening, the Supreme Court rejected the Texas case "for lack of standing.

"Texas has not demonstrated a judicially cognizable interest in the manner in which another State conducts its elections," the brief order said. Justices Samuel Alito and Clarence Thomas indicated they would have at least heard the argument.

"You know, this was our only chance," Paxton told Bartiromo:

So, our argument was pretty simple. These states are responsible, per the Constitution, the state legislatures, responsible for setting up laws as it relates to electing electors. And when those laws are deviated from by local officials, they violated state law and they violated the U.S. Constitution.

That, in effect, disenfranchises my voters, because we in Texas followed those laws. And now we're subjected to the fact that maybe, in Pennsylvania, for instance, there were -- it went from 233,000 mail-in ballots four years ago to 2.5 million.

And they -- a lot of those were not signature-verified. So we don't know if any of those ballots were fraudulent, and we can't go back and check.

Signed envelopes are separated from mailed-in ballots at election offices so no name is attached to a vote.

"The genie is out of the bottle," Paxton said. "We can't go back and verify whether there was actual fraud in a high percentage of these votes. So, going forward, I think the Trump -- I think the campaign is taking our arguments that we tried to get in front of the U.S. Supreme Court.

"They are now going to take those, I think, state by state, because I think they are legitimately good constitutional arguments that don't depend on actually proving every little instance of fraud."

Time has run out for election challenges, as the Electoral College will certify the presidential race today, and it's all but certain that Democrat Joe Biden will win.

You know, I am concerned about that, because now the precedent has been set. Because of COVID...a lot of these states relaxed their signature verification.

For some reason -- and I don't know why COVID would eliminate that requirement -- for some reason, in many counties in many of these states, they didn't do those signature verifications. So now, going forward, how do we know in Georgia whether we can trust those results either?

And those also affect us, because the U.S. Senate, obviously, if it flips, it affects my state in having an ability to get things done.

"They dropped hundreds of thousands of ballots. We caught them."  He called it a "modern-day version of stuffing the ballot box."

"The Supreme Court, all they did is say we don't have standing. So they're saying essentially that the president of the United States -- and Texas, and these other states, great states -- they don't have standing. They don't go into the evidence. If you look at the evidence, thousands of pages of evidence. We have over 1,000 affidavits from people that saw tens of thousands of ballots.

"No, but here's the point. They're winning these things on little technicalities, like a thing called standing. They're saying the president of the United States does not have standing," the president said.