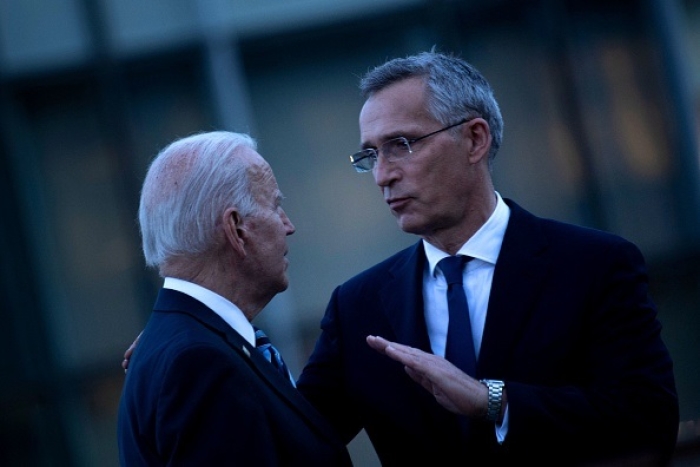 President Joe Biden and NATO Secretary General Jens Stoltenberg at a summit on June 14, 2021, at NATO Headquarters in Brussels. (Photo by BRENDAN SMIALOWSKI/AFP via Getty Images)

(CNSNews.com) - As Vladimir Putin's war in Ukraine enters its fourth week, NATO Secretary General Jens Stoltenberg will host the leaders of NATO countries in Brussels on Thursday, an urgent meeting that President Joe Biden plans to attend in person.

The White House on Sunday announced that Biden also will travel to Poland on Friday to meet with President Andrzej Duda in Warsaw to discuss "the humanitarian and human rights crisis that Russia’s unjustified and unprovoked war on Ukraine has created."

On Sunday, Stoltenberg told NBC's "Meet the Press" that the meeting in Brussels is a show of unity intended to send a message to Putin:

"We haven't yet decided on the exact format of that summit. It will take place on Thursday...with President Biden and all the other leaders," Stoltenberg said.

"And I think the meeting of all heads of state and government in NATO will provide us yet another platform to demonstrate our unity, our support to Ukraine, but also our readiness to protect and defend all NATO allies.

"And by sending that message, we are preventing an escalation of the conflict of full-fledged war between NATO and Russia."

Stoltenberg made that point several times, saying while NATO supports Ukraine, it will do all it can to avoid a wider war:

"It is extremely important that we prevent this conflict becoming a full-fledged war between NATO and Russia, because that will cause much more damage, much more death, destruction than what we see now in Ukraine," Stoltenberg said:

"Russia is a nuclear power. President Putin is now conveying very dangerous nuclear rhetoric. And therefore, we are supporting Ukraine but at the same time significantly increasing the military presence with the troops on land, at sea and in the air.

"Germany, U.K. have doubled the presence in the Baltic countries, in their battle groups there. The U.S. have now 100,000 troops in Europe. And there are tens of thousands of troops in the eastern part of the alliance to send the message that escalation beyond Ukraine will be met with a very firm response from the whole alliance.

“And by doing that, we are preventing a conflict, not provoking conflict in Europe."

Stoltenberg side-stepped a question of what NATO might do if Putin uses chemical weapons in a war that is not going well for him.

"Our core responsibility is to protect 1 billion people living in 30 different NATO-allied countries, and we are doing that by increasing the presence in the eastern part of the alliance. I also believe that regardless of how this conflict now ends, we are faced with a new reality, a new security reality, where Russia more openly contests core values for our security and are willing to use military force to achieve its objectives.

Host Chuck Todd told Stoltenberg it sounds like "you don't have an answer yet" on how NATO would respond to a chemical attack:

"At the same time we know that Russia has used chemical agents in Europe before against their own political opponents. And they -- Russia has been facilitating supporting the Assad regime in Syria where chemical weapons have been used.

"So this is something we take extremely serious, but at the same time, again, we are not -- we are very much aware that we need to act in a way that prevents this conflict from going from being a very bloody, ugly, horrific conflict in Ukraine to something that turns out to be a full-fledged war between NATO and Russia in Europe and also potentially involving, of course, the United States directly.

“That will be extremely dangerous and that is exactly what we need to prevent."

"But eat your Wheaties, eat your spinach," Psaki told reporters:

"It’s going to be a long Thursday — because on Thursday, to start the day, the President will attend an extraordinary NATO summit to discuss ongoing deterrence and defense efforts in response to Russia’s unprovoked and unjustified attack on Ukraine.

"He will also reaffirm our ironclad commitment to our NATO Allies and to defend every inch of our NATO...territory.

"Then he will join a scheduled European Council summit to discuss our shared concerns about Ukraine, including transatlantic efforts to impose economic sanctions on Russia, provide humanitarian support to those affected by the violence, and address other challenges related to the conflict.

"Later in the day, he will attend the G7 meeting called by Germany to further discuss with our Allies and partners the consequences we are imposing on Russia for its war of choice."

Psaki said more announcements would be forthcoming. And she said National Security Advisor Jake Sullivan will "preview" Biden's trip before he departs.