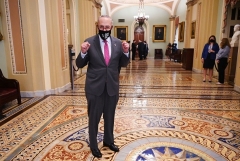 Senate Majority Leader Chuck Schumer speaks after the Senate passed a .2 trillion, bipartisan infrastructure bill with 19 Republican votes. Later, the Senate began the process of pushing through the rest of the Democrats' agenda. (Photo by MANDEL NGAN/AFP via Getty Images)

(CNSNews.com) - After passing a bipartisan infrastructure bill on a 69-30 vote Tuesday -- 19 Republicans joining all the Democrats -- the Senate worked into the early morning hours, finally passing a much larger, $3.5 trillion budget resolution, this time with only Democrat votes.

"Senate Democrats just passed our budget resolution to provide historic investments in American jobs, American families, and the fight against climate change," Schumer wrote. "It puts us on track to bring a generational transformation to how our economy works for average Americans."

The budget resolution passed 50-49. It is the first step in the reconciliation process that may allow Democrats to ram through their entitlement/green energy agenda with only 51 votes.

Various Democrat-led committees will now write the actual language to be voted on in the next step of the reconciliation process.

Democrats have made it very clear that the bipartisan infrastructure bill will not come up for a vote unless the larger reconciliation bill passes. It's an all-or-nothing package, two halves of Joe Biden's "Build Back Better" whole, in other words.

House Minority Whip Steve Scalise (R-La.) told "Mornings with Maria" on Wednesday that he hopes neither bill will pass, although the bipartisan bill "has a lot of momentum behind it coming out of the Senate."

"But now we're starting to see the details" of that bipartisan bill, Scalise said, "and there are a lot of things in there people are not going to like, not the least of which is the ability for the secretary of transportation to start process of imposing a per-mile car tax on every person who drives a car in America.

"They also have hundreds of billions of dollars in slush funds," he continued:

But the big problem here, Maria, they're going to have is that it is directly linked to that tax-and-spend bill -- the $3.5-trillion-dollar budget reconciliation bill that is now moving as well. Nancy Pelosi's made it clear that the two bills are linked together. Reconciliation, in her mind, has to pass before she even brings up the infrastructure bill so the two are one and the same, which means over $5 trillion dollars of new spending with taxes to go with it that would kill middle-class jobs.

Joe Biden can talk all he wants about people making less than $400,000 dollars a year. Does anybody in America think that a bill written by Bernie Sanders is going to leave your pocketbook alone? Of course, every family's going to feel the impact of it, starting with the car tax.

But think about inflation. Maria you've talked about this a lot all of the inflation that we're seeing today -- with a trillion-and-a-half dollars spent in the COVID relief that had nothing to do with COVID relief --imagine if you throw another $5 trillion dollars of borrowed money that somebody's going to have to pay for. This bill doesn't pay for all of that. It just spends a whole lot of money on things they're calling infrastructure that have nothing to do with infrastructure.

So a lot of green new deal garbage in there -- over a hundred billion dollars in this linked package goes to people here illegally for amnesty. That's in the bill. I don't hear anybody talking about that. They talk roads and bridges, and they're hiding behind that, but the actual bill has over a hundred billion dollars for things like amnesty. I wonder why they don't want to mention that, too, when the two bills directly linked together. President Biden said it; Nancy Pelosi said it; Chuck Schumer said it.

Scalise said the Republicans from day one should have insisted that the two infrastructure bills not be tied together. "And they didn't make that demand," Scalise said, which means both bills are advancing as one giant Democrat package.