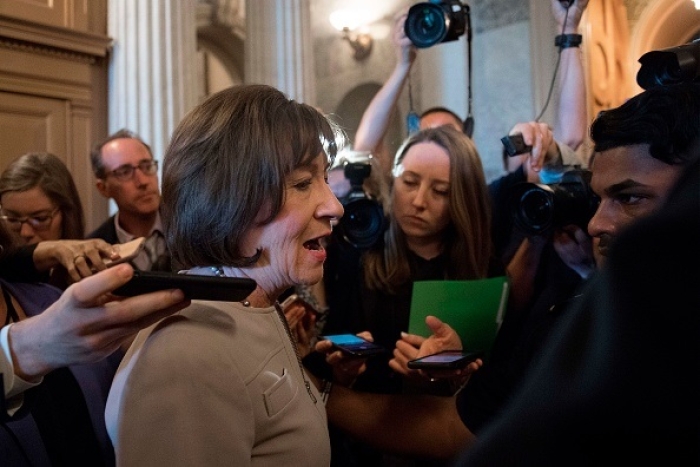 Senator Susan Collins, R-Maine, is swarmed by reporters after confirming she will vote yes for US Supreme Court nominee Brett Kavanaugh, on October 5, 2018. (Photo by JIM WATSON/AFP via Getty Images)

She may not be the last. Sen. Mitt Romney (R-Utah) says he's still reviewing her record.

Collins took enormous criticism -- and put her re-election in jeopardy -- when she voted to confirm Justice Brett Kavanaugh after the character assassination he received at the hands of Democrats on the Judiciary Committee in 2018.

All 50 Democrats will vote to confirm Judge Jackson, and Collins' vote means they can now describe Jackson's support as "bipartisan."

"After reviewing Judge Ketanji Brown Jackson’s extensive record, watching much of her hearing testimony, and meeting with her twice in person, I have concluded that she possesses the experience, qualifications, and integrity to serve as an Associate Justice on the Supreme Court.  I will, therefore, vote to confirm her to this position.

"Judge Jackson has sterling academic and professional credentials.  She was a Supreme Court clerk, a public defender, a respected attorney, and a member of the Sentencing Commission.  She has served as a federal District Court judge for more than eight years and currently sits on the D.C. Circuit Court of Appeals.  Her stellar qualifications were confirmed by the American Bar Association’s Standing Committee on the Federal Judiciary, which awarded her its highest rating of “unanimously well qualified.”

"In my meetings with Judge Jackson, we discussed in depth several issues that were raised in her hearing.  Sometimes I agreed with her; sometimes I did not.  And just as I have disagreed with some of her decisions to date, I have no doubt that, if Judge Jackson is confirmed, I will not agree with every vote that she casts as a Justice.

"That alone, however, is not disqualifying.  Indeed, that statement applies to all six Justices, nominated by both Republican and Democratic Presidents, whom I have voted to confirm.

"No matter where you fall on the ideological spectrum, anyone who has watched several of the last Supreme Court confirmation hearings would reach the conclusion that the process is broken.  Part of the reason is that, in recent years, the process has increasingly moved away from what I believe to be appropriate for evaluating a Supreme Court nominee.

"In my view, the role the Constitution clearly assigns to the Senate is to examine the experience, qualifications, and integrity of the nominee.  It is not to assess whether a nominee reflects the ideology of an individual Senator or would rule exactly as an individual Senator would want.

"It used to be common for Senators to give the President, regardless of political party, considerable deference in the choice of a nominee.  One need look no further than the 98-0 vote Justice Scalia received in 1986 and the 96-3 vote Justice Ginsburg received in 1993.

"This approach served the Senate, the Court, and the Country well.  It instilled confidence in the independence and the integrity of the judiciary and helped keep the Court above the political fray.  And this is the approach that I plan to continue to use for Supreme Court nominations because it runs counter to the disturbing trend of politicizing the judicial nomination process."

Kavanaugh was confirmed by a vote of 50-48 on October 6, 2018. One Democrat, Sen. Joe Manchin of Virginia, made his confirmation "bipartisan" as well.

Also See:
Collins to Vote Yes on Kavanaugh; Manchin Only Democrat to Vote Yes
Sen. Susan Collins: 'I Think That Judge Kavanaugh Drank Too Much in High School,' But...