Sen. Susan Collins: 'I Don't Think We Should Compromise on the Far-Left Agenda' 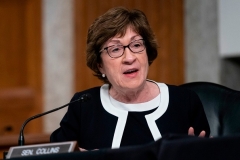 Senator Susan Collins (R-Maine) will have more influence in a closely divided Senate. (Photo by ALEX EDELMAN/POOL/AFP via Getty Images)

(CNSNews.com) - Sen. Susan Collins, a Maine Republican who defied the polls that had her losing the election, is returning to Washington, willing to compromise with Democrats on some issues -- but not all:

"Well, I don't think we should compromise on the far-left agenda that Bernie and others are pushing," Collins told Fox News's Martha MacCallum on Monday night.

"But I do think there are ways to work together on everything from another COVID relief bill to deal with the health and economic consequences of the pandemic, to an infrastructure package, as I just mentioned, and also making the market more competitive for prescription drugs, to help bring down the price."

On Sunday, Sen. Bernie Sanders said his agenda is not far-left:

"I sometimes find it amusing when our opponents talk about the far left agenda," Sanders told CNN's "State of the Union." "Raising the minimum wage to 15 bucks an hour, when you're talking about expanding health care to all people as a human right, making public colleges and universities tuition-free, these are not far left ideas."

Oh yes they are, Collins said:

"And I think one of the messages that voters sent was, they are rejecting that far-left agenda, which includes packing the Supreme Court, defunding our police officers, and also ending the filibuster, Medicare for all, which would decrease the quality and accessibility of health care in this country, cause many of our rural hospitals to close.

"Those are far left ideas. And I know Bernie sincerely believes in them, but I think it's pretty clear that most of America does not."

Even if Republicans maintain control of the Senate, they will have a narrow majority, and Collins is not a reliable conservative vote. However, the liberal Maine Republican is now considered a key swing vote.

As MacCallum noted, Politico recently declared that Collins is "at the peak of her power -- and is preparing to play a central role in the Senate" during a Joe Biden presidency.

Politico reported she received a call from Democrat Joe Biden after her election victory, and Collins said she has received calls from "at least eight Democratic senators" who wondered, "How we can work together."