Sen. Sherrod Brown: 'How Many Workers Should Give Their Lives' to 'Juice' GDP or the Stock Market? 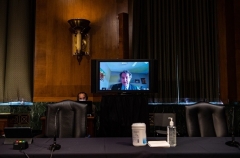 Sen. Sherrod Brown, (D-Ohio), is the ranking member of the Senate Banking Committee. (Photo by SALWAN GEORGES/POOL/AFP via Getty Images)

(CNSNews.com) - Is it "fair" that essential workers, often women and minorities who work in service industries, "put their lives on the line for very low wages? They're still worried about paying the bills. Is that fair?"

And here's another politically charged question: "How many workers will die if we send people back to work without the protections they need?"

Sen. Sherrod Brown, Democrat of Ohio, asked those questions of Treasury Secretary Steve Mnuchin on Tuesday at a hearing of the Senate Banking Committee, conducted remotely because of the pandemic.

"The administration thinks we should put more workers at risk to juice the stock market," Brown stated.

Mnuchin has worked with Democrats in recent weeks to help craft several coronavirus relief bills, and even House Speaker Nancy Pelosi has praised that "bipartisan" effort.

But bipartisanship evaporated on Tuesday, when Brown pressed Mnuchin on "fair" wages and killing workers to "juice" the stock market and GDP:

"So how many workers should give their lives to increase our GDP by half a percent?” Brown asked. “That -- you're pushing people back into the workplace. There's been no national program to provide worker safety. The president says reopen slaughter houses -- nothing about slowing the line down, nothing about getting protective equipment.

“Is -- how many workers should give their lives to increase the GDP or the Dow Jones by a thousand points?" Brown asked Mnuchin:

"No workers should give their lives to do that, Mr. Secretary, and I think your characterization is unfair," Mnuchin responded. "We have provided enormous amounts of equipment, we've worked with the governors, we've done a terrific job of getting--"

"Mr. Secretary, I'm not going to let you make a political speech about how -- what a great job, we hear that from the president at his news conferences, when in fact...the president has still not led an effort to scale up testing. He's played state against state, he's played hospital against hospital to get protective equipment. Everybody in the country, your comments notwithstanding, knows that."

In his closing remarks, Brown went back on attack: "The administration thinks we should put more workers at risk to juice the stock market. They haven't come up with a basic plan to protect workers when they go back to work."

Brown then trotted out the old Democrat line about President Trump and Senate Majority Leader Mitch McConnell wanting to "give tax breaks to billionaires," a price tag that "didn't matter a couple of years ago," he said. "But we need to spend money now to keep workers safe in spite of the comments of some in the administration and some in Senate leadership," Brown concluded.

Banking Committee Chair Sen. Mike Crapo (R-Idaho) told Brown, the ranking member, "I would disagree with that characterization as well. But let's move on."

At the beginning of his question period, Brown asked Mnuchin several times about the "fairness" of "low wages" paid to various service industry workers who have "put their lives on the line" by continuing to do their jobs during the pandemic: "Is that fair?" Brown asked Mnuchin.

Brown urged Mnuchin and Federal Reserve Chairman Jerome Powell to "support pandemic pay" for those "low-paid workers who we continue to celebrate as essential."