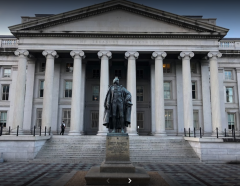 Warren ignited a Twitter feud with billionaire Elon Musk by tweeting on Monday: "Let’s change the rigged tax code so The Person of the Year will actually pay taxes and stop freeloading off everyone else."

Responding to Warren's plan to tax the rich more to pay more for the poor, Sen. Rob Portman (R-Ohio) noted that tax revenues "are actually very high right now, relative to where they have been."

In other words, last quarter, it looks like our revenues may have been at a record level. So it's not that we're not taxing enough. We're taxing a lot. And there's a lot of uncertainty in the economy. So the more you tax the economy, the more you're going to hurt working families. All the things that are in this so-called Build Back Better tax-and-spend extravaganza hurt working families.

So the real issue is spending. It's spending that has increased dramatically. And $1.9 trillion in March that was already spent is part of the problem. And now they want to make it even worse by once again overheating the economy with more stimulus spending that's going to result in higher inflation.

The American people get that because they're going to the store, they're going to the gas pump, they're trying to buy clothes, and everything's going up. You just had a great report...saying that it's not only about the consumer prices going up, but now, as of the new numbers we just got last night, it was about the Producer Price Index at historic levels since we started keeping track of it over 10 years ago.

Portman said the best thing to do right now is to "just take a pause" on spending, and that means putting aside the Democrats' multi-trillion "Build Back Better" bill.

"As Joe Manchin said wisely, let's take a strategic pause. We're in the middle of four things right now, incredibly high inflation, which will only be exacerbated by this, record levels of debt, both in nominal terms, but also as a percent of our economy, which is how you ought to look at it.

And that's really scary to all of us, also a lot of uncertainty because of COVID. We have a situation now where, unfortunately, the COVID situation doesn't seem to be getting better, as we'd all hoped.

And then I would just say we're in an uncertain time here, in terms of a lot of other expenditures. Look at the natural disaster that just happened in Kentucky and other states around the Midwest and the South. Look at all the other natural disasters. We don't have enough money in the FEMA bank to be able to handle all this.

"So, it creates big deficits, but it also creates this issue where we're adding more to inflation in an economy that's already suffering too much. And it's getting -- middle-class families and lower-income families are the ones taking the hit here, people on fixed incomes, seniors, young people," he said.