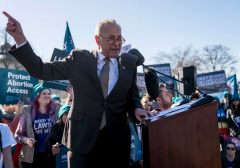 But I think if we are going to criminalize speech and somehow impeach everybody who says, oh, go fight to (make) your voices heard, really we ought to impeach Chuck Schumer then.

He went to the Supreme Court, stood in front of the Supreme Court and said specifically, hey, Gorsuch, hey Kavanaugh, you've unleashed a whirlwind and you're going to pay the price. You won't know what hit you if you continue with these awful decisions.

This inflammatory wording, this violent rhetoric of Chuck Schumer was so bad that the chief justice, who rarely says anything publicly, immediately said this kind of language is dangerous, as a mob tried to invade the Supreme Court.

In March 2020, Schumer went to the steps of the U.S. Supreme Court and warned Justices Gorsuch and Kavanagh not to uphold abortion restrictions:

"They’re taking away fundamental rights. I want to tell you, Gorsuch, I want to tell you, Kavanaugh, you have released the whirlwind! And you will pay the price! You won’t know what hit you if you go forward with these awful decisions,” Schumer said.

This morning, Senator Schumer spoke at a rally in front of the Supreme Court while a case was being argued inside. Senator Schumer referred to two Members of the Court by name and said he wanted to tell them that that “You have released a whirlwind, and you will pay the price. You will not know what hit you if you go forward with these awful decisions.” Justices know that criticism comes with the territory, but threatening statements of this sort from the highest levels of government are not only inappropriate, they are dangerous. All Members of the Court will continue to do their job, without fear or favor, from whatever quarter.

President Trump's Senate impeachment trial is set to begin on Tuesday, with Trump accused of inciting insurrection at the U.S. Capitol by refuting the election results and using rhetoric to influence the mob that stormed the Capitol on January 6.

"However, I think you're going to see the Trump defense play video of Maxine Waters telling crowds to mob Trump administration and restaurants and attack them," Paul said.

They'll probably show clips of Cory Booker saying, get up in their face of these Congress people. You'll probably see comments from Representative Omar wishing and celebrating the violence that happened to me when I had six ribs broken and part of my lung removed.

I think you're going to see all of this, and people are going to have to judge for themselves, are we going to impeach and potentially criminally prosecute people for political speech when they get -- say, get up and fight for your country, let your voices be heard.

Has nobody in this country heard of figurative speech? You could argue that his position was wrong and that it was misguided. I accept all of that. But if you're going to criminalize his speech, you have to do it with the same standard.

Paul said both parties must be treated the same. "I think if Democrats had any bit of self-reflection, they would be saying this is a really terrible idea."