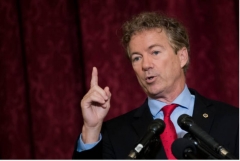 There's no rainy day fund. There's no savings account. It's not like we go over to the Federal Reserve, open the safe, and we find out, oh, we have all this money we can give to people.

The $3 trillion we have already sent to people because of this government-mandated depression has been borrowed. Where are they going to get another trillion dollars? They're going to borrow it.

The government, and particularly the governors, need to get out of the way, let the economy open up, and let individuals assess their risk and act accordingly.

Paul criticized the extra $600 in unemployment insurance given to people already collecting such benefits in the last $2 trillion coronavirus relief bill.

So, right now, the institutional unemployment, if you make less than about $50,000 a year, you have got no business working. Why work if the government will give you a free $50,000?

If the Democrats get their way, and unemployment goes on for months and months and months, if not years, what will happen is, nobody will work for less than $50,000 in this country, because you can get that for not working.

Paul said the Republicans' idea of giving people a bonus to return to work is "only slightly less stupid" than the Democrats' hoped-for extension of unemployment insurance.

"Let's get rid of the root cause of this depression. Sometimes, we don't know exactly the cause of the depression. In this one, we do know the cause, the government. The government shut the economy down. The government needs to get the hell out of the way and let us all go back to work, and let each and every one of us assess the risk and make decisions accordingly."

House Speaker Nancy Pelosi (D-Calif.) is making the rounds on television, promoting the Democrats’ $3-trillion “HEREOS Act,” which Republicans have rejected as nothing more than a “messaging exercise,” “a laundry list of agenda items that have nothing to do with the coronavirus,” as Sen. John Thune put it.

Senate Republicans  reportedly are working on a less expensive relief package of their own.

At her July 10 news conference, Pelosi made it clear that Democrats will insist on more than a trillion dollars in any future relief bill.

“What doesn't measure up is: ‘Oh, it can only be a trillion dollars,’” Pelosi said.

“So, a trillion dollars is: Okay, that is an interesting starting point, but it doesn't come anywhere near,” she said.