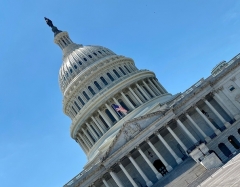 (CNSNews.com) - Both the House and Senate on Monday passed a $2.3 trillion bill, including $900 billion in COVID relief and the rest to keep the federal government operating.

The Senate vote was 92-6, with six Republicans voting against the 5,593-page bill -- dubbed by The Associated Press as "by far the longest bill ever."

The no votes came from Sens. Marsha Blackburn of Tennessee, Rand Paul of Kentucky, Rick Scott of Florida, Ron Johnson of Wisconsin, Mike Lee of Utah, and Ted Cruz of Texas.

In a speech on the Senate floor, Sen. Paul (R-Ky.), true to his fiscal conservatism, railed against the federal government spending money it doesn't have -- and Republicans voting for something they claim to oppose:

The monstrous spending bill presented today is not just a deficits-don't-matter disaster. It is everything Republicans say they don't believe in.

Maybe these new free-money Republicans should join the everybody-get-a-guaranteed-income caucus. Why not $20,000 a year, why not $30,000?

If we can print up money with impunity, why not do it? The Treasury can just keep printing money – that is, until someone points out that the emperor has no clothes and that the dollar no longer has value.

To so-called conservatives who are quick to identify the socialism of Democrats, if you vote for this spending monstrosity, you are no better. When you vote to pass out free money, you lose your soul and you abandon forever any semblance of moral or fiscal integrity.

"If you’re looking for more COVID bailout money, we don’t have it. The coffers are bare,” he said. Even without the extra pandemic relief, the government has been spending money it doesn't have.

“Today’s money is gone. So Congress is spending tomorrow’s money…This is the money that your children and your grandchildren will pay back with interest," Paul warned.

Paul said the debt crisis is worsening, partly because of "the government's overzealous response" to the pandemic:

"The more money we give to the states, the more they keep us in lockdown. Every bailout dollar printed and passed out to the governors only allows these tin-pot dictators to perpetuate the lockdowns. Their rules are arbitrary and unscientific. Governors and mayors across the country are picking winners and losers.”

"The answer’s not printing up and distributing free money. It's opening the economy," Paul said.

Let people rebuild their livelihoods. Reopen our schools so our kids can return, parents can go back to work. Congress should do away with automatic spending increases and scrutinize where in the budget we can find savings to pay for the pressing needs arising from the pandemic, but we shouldn't simply print up money and pass it out to everyone.

Or Congress can follow the status quo. Congress can continue to borrow from our kids. Those same children we have locked out of our schools. Congress can keep enabling and shutting down businesses by force, spend all of today's money and all of tomorrow’s money, and then good luck. Good luck figuring out how to pay for all of this massive debt.

“It doesn't have to be this way," Paul said. The alternative is to “open the economy.”

“It's not too late to change our course. Cut unnecessary spending, eliminate waste, stop fighting a $50-billion a year war in Afghanistan that hasn't had a military mission in at least a decade. Make the hard decisions now. We can't keep pretending that more debt is a sustainable policy course.”

Paul said he will "continue to sound the alarm" until the country changes course.

“Adding more debt is a mistake. It is not the solution, and we should resist it.”