Sen. Rand Paul: Illegal to Eavesdrop on Someone for Political Purposes 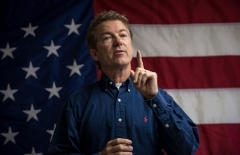 Sen. Rand Paul (R-Ky.) is a former contender for the Republican presidential nomination. (Photo by Rick Friedman/Corbis via Getty Images)

People always say it's not against the law to unmask someone. Well, actually, it is, if it's for political purposes, so that's what needs to be investigated. What I want to know is what possible national security reason would there be to unmask Flynn?

They listen to the conversation. They obviously know who it is because they probably recognize his voice where he introduces himself and he talks to the Russian ambassador. And so they probably talk about a wide range of issues between Russia and the United States.

I haven't seen the transcript of this (the Dec. 29 phone calls Flynn had with the Russian ambassador). But the question is, what could they possibly think, was Flynn saying, oh, we're going to do something that was illegal? Or that would threaten our national security? And why was everybody in the Obama administration listening to the phone call and finding out and knowing that it was General Flynn?

Someone leaked Flynn's unmasked name to the Washington Post's David Ignatius, who published a column on Jan. 12, 2017, disclosing Flynn's conversation and musing about whether Flynn had violated the obscure Logan Act.

(According to documents filed in Flynn's case, former Deputy Attorney General Sally Yates "recalled Comey mentioning the Logan Act" at a Jan. 5 White House meeting with President Obama. Yates was surprised that President Obama knew about Flynn's calls to the Russian ambassador before she did. She didn't know who gave him the information.)

"The entire (Obama) inner circle was listening to this phone call, not for national security reasons," Paul said on Thursday. "They were listening to it because they wanted to do anything they could do to damage the incoming administration. They were also doing it because they were desperate because they did not have any evidence of Russian collusion, so they were trying so hard to find something because they had gotten the ball rolling on this."

Sen. Paul is calling for reform.

Two days ago, he introduced an amendment to H.R. 6172, the USA FREEDOM Reauthorization Act of 2020, to protect every American’s privacy, ensure due process, and reassert the Fourth Amendment.

The amendment would still allow the Foreign Intelligence Surveillance Court to order surveillance of non-Americans and our enemies, but it would require the government to obtain a warrant from a traditional federal court to surveil an American.

The amendment would also prohibit the federal government from introducing into evidence any information gained from warrantless surveillance on an American, while guaranteeing an American’s ability to use such evidence in their defense.

"If you want to investigate the Trump campaign or the Biden campaign, you go to a real judge in a constitutional court and you get a real warrant, a constitutional warrant but you shouldn't be able to do it in secret," Paul said.