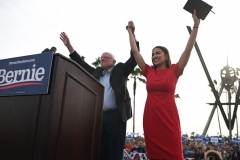 "Here's what I learned from last night," Kennedy said, referring to the first night of the Democrat National Convention.

Vice President Biden may be the nominee of the party, but Bernie Sanders is the head of the party, that's clear. And really, what Senator Sanders has done is pretty breathtaking. He and Congresswoman Ocasio-Cortez have almost physically lifted this party up and moved it to the left. I hardly recognize it.

I mean, their message to America is now, finish school, get a job, and work hard so we can take the money you earn and give it to somebody who didn't. Redistribution and race underpins all of their policies, and I don't recognize this Democratic Party.

As CNSNews.com reported, Schumer indicated it is the government's job to reduce disparities in income and wealth:

"Let me tell you some of the things we'd do," Schumer said, if Democrats take the presidency and both chambers of Congress:

We will make health care affordable for all. We'll undo the vicious inequality of income and wealth that has plagued America for far too long, and we'll take strong, decisive action to combat climate change and save the planet.

We will protect voting rights, fight systemic racism in the criminal justice system and in our economy; and restore a Supreme Court that looks out for people, not corporations.

We'll rebuild our infrastructure and make sure every home, from inner city to rural America, has broadband. We will save the post office, and once and for defeat COVID 19, this evil disease.

And beckoned by the lady behind us (the Statue of Liberty), we will reform our immigration system, so immigrants yearning to breathe free will at last become American citizens.

The Democrat agenda comes with an enormous price tag, in this era of pandemic-induced closures, multi-trillion-dollar COVID relief bills, and a soaring debt and deficit.