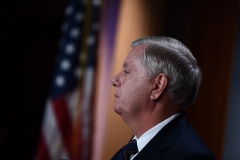 Sen. Lindsey Graham (R-S.C.) is seen at the US Capitol on January 7, 2021, the day after rioters stormed the building. (Photo by BRENDAN SMIALOWSKI/AFP via Getty Images)

(CNSNews.com) - Sen. Lindsey Graham (R-S.C.) on Wednesday warned that holding an impeachment trial after the president leaves office is "bad for the presidency, bad for the country, and if we go along with it as Republicans, we will destroy the Republican Party."

If this becomes the norm, be careful what you wish for today. Under this theory, the radical left -- if you can impeach a president after they're out of office, why don't we impeach George Washington? He owned slaves. Where does this stop?

So, to my Republican colleagues, let's stand firm for the idea -- whether you like Donald Trump or not, he's not above the law. If he did something wrong, you know, you can face the consequences of the law.

Impeachment is political. What we're doing here is we're impeaching the president without any evidence, without any witnesses, and we're going to have a trial after they 're out of office. How do you survive as a president in the future?

This will be an attack on the presidency in perpetuity. Should we impeach Barack Obama because for 24 hours, he never lifted a finger to help those people under siege in Benghazi? Where does this stop?

Graham said Americans should "come together" to "reject post-presidential impeachments because it will destroy the country and it will incite violence. If you want to end the violence, end impeachment," he said.

Graham also condemned what he called "outrageous misconduct" by Congress:

We had an impeachment in 24 hours, without a witness, without a lawyer, without a real hearing. Now, what's the trial going to look like? We are going to impeach Donald Trump after he's out of office.

To the American people, what good comes from impeaching President Trump after he's out of office? That's an unconstitutional attack on the presidency. It will divide the country. It will incite violence.

So, Joe Biden, if you're watching tonight, you have a chance to practice what you preach. You should call on Chuck Schumer and Nancy Pelosi and say, for the good of the country, President Trump will be leaving office on January 20th, let's stop impeachment. Let's stop it now.