Sen. Graham: Stimulus Bill Is 'Out of Control Liberalism'; 'Reparations' for Black Farmers 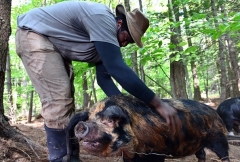 A black farmer checks on livestock in September 2020 in Petersburg, New York. (Photo by ANGELA WEISS/AFP via Getty Images)

(CNSNews.com) - It took 27 hours, but in the end, Democrats managed to pass their bloated stimulus bill 50-49 on Saturday without a single Republican vote.

He noted that a year ago March, Congress passed a different $1.9 trillion bill -- "the same amount of money, 96-0, because we understood the need to fight COVID. A year later, March of 2021, the Democrats have the House, the Senate in the White House.

"And what did we tell you? If they get everything, they're going to run us over. This is out-of-control liberalism."

Graham said most of the money in the latest bill won't be spent this year, and he noted that "90 percent of it's got nothing to do with COVID."

These people in the Congress today, the House and the Senate on the Democrat side, are out-of-control liberals. And God help us all if we don't check and balance them in 2022.

Bartiromo asked, "Where is this money coming from, now that we have got a $28 trillion tab in debt?"

"Well, it's coming from your children and your grandchildren. It's all borrowed money," Graham said.

But it's deeper than that. Look back and see what's happened in the Democratic-controlled House in the last 30 days. You have passed a COVID relief package, $1.9 trillion, very partisan; 90 percent of the money's got nothing to do with COVID.

You have got H.R.1, which is open borders for voting. The federal government is going to take over the voting systems in this country. There will be no checks and balance, no verification of who you are, mail-in voting run rampant. So, it's really open borders for voting, and, finally, the Equality Act. That doesn't get enough attention.

They passed a bill that does away with a distinction between being a man and woman in the law. Biological boys are going to start playing in girls’ sports. And if you're a religious organization out there, and your faith dictates that certain things happen, this bill takes that ability to say no away from you.

It's a reshaping of America. This is a trilogy of radical policy. And I hope the American people are paying attention, because, if you're not, you're going to wake up in a few years and your country will not be the nation you remember it being.

H.R. 1 is 'a federal takeover of elections'

Graham predicted that H.R.1 will die in the Senate, but only because the filibuster still exists.

And not one Republican is going to vote for H.R.1, because it's a federal takeover of elections. It sets up a system where there is no real voter security or verification. It is a liberal wish list in terms of how you vote."

Graham predicted the Equality Act "will meet the same fate."

Speaking about both of those bills, Graham said, "We're going to fight hard as hell to make sure they go nowhere."