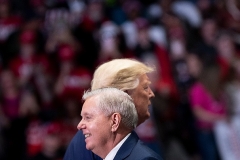 (CNSNews.com) - "We should expect a peaceful transfer of power" on January 20, Sen. Lindsey Graham (R-S.C.) said on Sunday. He offered the incoming President Joe Biden some advice on what to do and what not to do:

You talk about unifying the country. If you do not stand up against the impeachment of President Trump after he leaves office, you're an incredibly weak figure in American history.

President Trump is trying to heal the nation. Pursuing impeachment after he leaves the office will further divide the country.

It will ruin the start of your presidency, Joe Biden. You need to stand up to the radical left and tell Schumer to dismiss what I think is an unconstitutional attempt to impeach President Trump out of office. Stand down.

Graham said a Senate conviction of Trump will further divide the country:

This has never been done in the history of our country. I think it is blatantly unconstitutional. It's being driven by the radical left. And what is Joe Biden doing? He's sitting on the sidelines and doing nothing.

One phone call from president-elect Biden would stop this.

And to my Republican colleagues in the Senate, if we embrace an unconstitutional impeachment of Donald Trump after he is out of office, it will destroy the party. The Republican Party wants to move forward. President Trump's going to be the most important voice in the Republican Party for a long time to come.

He's going to accept responsibility for his part on January the 6th. But impeaching him after he leaves office is not only unconstitutional. From a Republican point of view, it would destroy our party. I hope the Republican Senators know that, because it is a reality. And it will not help the country, the most important thing.

Impeaching him after he leaves office will be disastrous for this country and our party.

Biden has said he will return to the Paris climate accords in his first moments as president, but Graham said that would be a "disaster for the U.S. economy."

"The accords basically give China and India pass on their carbon emissions. And how do you enforce a national mask mandate?" Graham asked. "So, if that's what he's going to lead off with, he's going to have a tough rollout of his presidency."

Graham said he expects Democrats to use budget reconciliation to raise taxes with a simple Senate majority of 51 votes.

I have got a fight on my hands. The one thing I want to tell President Trump, you're leaving office with some of the most significant accomplishments -- accomplishments in my lifetime. You brought order to chaos at the border. You rebuilt the military when it was on its back. You destroyed ISIS. You got five peace agreements between Arab countries and Israelis. You got the USMCA. You cut our taxes.

Here's what I think Republicans need to do. Work with Biden where we can, maybe on infrastructure, but fight like hell turning America into a socialized nation. Fight like hell to make sure we don't undercut border security. Reject the Green New Deal. Fight like hell against raising taxes.