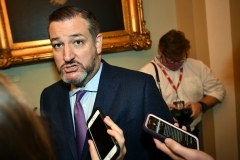 (CNSNews.com) - Sen. Ted Cruz (R-Texas) calls China "the most significant geopolitical threat to the United States for the next century," and he plans to do something about it.

Cruz announced he is introducing four bills regarding China this week, including one aimed at Hollywood's willingness to "kowtow to the Chinese communists" by letting the Chinese government censor American movies.

When it comes to propaganda, I'm introducing legislation called the SCRIPT Act that is focused on Hollywood. Hollywood far too often lets the Chinese Communist government censor American films.

"The Chinese government took issue with the fact that Maverick's jacket, the back of it, had a flag, a Japanese flag and a Taiwanese flag. And so the movie maker has censored them and has changed the jacket.

"Think about it for a second, Judge. What we are saying is that Maverick is scared of the Chinese Communists. That is ridiculous. Hollywood producers who claim to support the First Amendment and free speech readily let the Chinese government censor."

The Chinese government objected to part of the movie showing that Freddie Mercury was homosexual.

"Hollywood was more than happy to edit the scene out," Cruz said. "They did it, because the Chinese government didn't want to acknowledge that Freddie Mercury was homosexual. Look, that's a huge part of the story. And the problem is, Hollywood is more interested in making millions of dollars from the Chinese market than they are in free speech, than they are in artistic integrity."

Cruz also plans to introduce a bill imposing "strict sanctions" on the Chinese government officials who "covered up" the pandemic.

Another piece of legislation would prohibit the U.S. government from conducting any business over any telecom or Internet infrastructure that China owns or controls because "they use it to steal" U.S. military secrets and other national security information.