Sen. Cruz: Democrats' Priority Is 'To Stay in Power Forever' 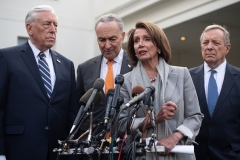 These top Democrats are determined to change the rules to cement their power and change the country. (Photo by SAUL LOEB/AFP via Getty Images)

(CNSNews.com) - Anyone who disagrees with Democrats on any issue, including their attempted power grab, "is racist" nowadays, Sen. Ted Cruz (R-Texas) told Fox News on Friday:

You know, people talk about playing the race card. It is the only card they have in their deck, and so that’s their standard attack.

So you look at what they’re pushing. They are pushing D.C. statehood, why? Because they want two new Democratic senators. They’re pushing HR 1, what many are calling the corrupt politicians act, because they want to federalize elections – they wat to register millions of illegal aliens and felons to vote and keep Democrats in power for the next hundred years.

And they want to pack the U.S. Supreme court and add four new left wing justices because they want to change the rules and maintain power. That's their priority and it’s not what they should be doing.

Cruz said the chances of a D.C. statehood bill or a court-packing bill passing Congress are "zero," but only if the Senate filibuster rule remains in effect:

If it is the case that it takes 60 votes to move forward, which has been the case in the Senate for a long, long time, then both of those are dead on arrival. The Democrats know that. That's why they want to change, blow up the Senate rules, end the filibuster in order to change the fundamental election rules.

This is all about power, and it’s why there’s so much pressure on those two Democratic senators.

Manchin, from West Virginia, and Sinema, from Arizona, have so far kept their word not to scrap the filibuster.

“When you have a place that’s broken and not working, and many would say that’s the Senate today, I don’t think the solution is to erode the rules,” Sinema told The Wall Street Journal earlier this month.

“I think the solution is for senators to change their behavior and begin to work together, which is what the country wants us to do.”