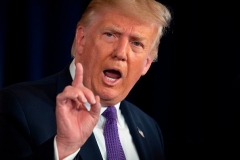 (CNSNews.com) - Sen. Chris Murphy, a Connecticut Democrat, told "Fox News Sunday" that he has a different interpretation of the Constitution's impeachment clause than Republican Sen. Rand Paul does, but Murphy doesn't think Rand Paul is making a "ridiculous" case.

"I admit that Senator Paul's case is, you know, not from outer space," Murphy conceded.

Article I, Section 3 of the Constitution says: "Judgment in Cases of Impeachment shall not extend further than to removal from Office, and disqualification to hold and enjoy any Office of honor, Trust or Profit under the United States: but the Party convicted shall nevertheless be liable and subject to Indictment, Trial, Judgment and Punishment, according to Law."

Sen. Paul argued on Sunday that "removal" must happen before "disqualification," and "removal" doesn't apply in Trump's case because he's already left office.

"So, listen, I will admit that this is, of course, a matter of first impression," Murphy told Fox News's Chris Wallace:

And so I don't think the case that Senator Paul is making here is a ridiculous one.

I come to a different judgment. I think that that clause that gives Congress the responsibility to deny an official future office requires us to take this step even though the president has left office. And, of course, as you cited, there is precedent for that [an 1876 case involving then-Secretary of War Will Belknap].

It sets up a strange circumstance by which a president or any official could very quickly resign to preserve their right to run later on, even though they engaged in pretty serious misconduct.

So I think we have this responsibility. But I -- listen, I admit that Senator Paul's case is, you know, not from outer space.

Paul is among the Republicans who say the former president can be prosecuted and tried as any other private citizen could be if a crime is alleged.

"So it (Trump impeachment) is a farce, it is unconstitutional. But more than anything, it's unwise and going to divide the country," Paul said.

Sen. Murphy, on the other hand, told "Fox News Sunday," "I think we have a constitutional responsibility to hold this trial."

"I don't think our job ends just because a president has left office, in part because impeachment comes not only with the provision to remove an official from office, but to disqualify them for future office. So there is still a consequence to President Trump if convicted," Murphy said.

And, second, this doesn't stop the rest of the business we're considering...We're going to do our constitutional responsibility and hold a trial. It won't last very long. We are going to move forward nominees and we are going to continue to push forward COVID relief legislation. The Senate can do all of those things, and we will."

Murphy said if House impeachment managers want to call witnesses, they should be allowed to do so.

And beyond Trump's alleged incitement, Murphy said he's bothered that Trump had a delayed response to his supporters who were storming the Capitol:

And then, as they were attacking the Capitol, he had a chance, right, as the insurrection was beginning, to tell them to stand down.

And so even as the riot was occurring, the president had a chance to turn it around and instead he incited it, knowing what was happening at the Capitol. So I think the case is absolutely clear both in that rally at the White House and during the riot itself, the president was taking steps to make it worse, not better.

And there is, of course, reporting from inside the White House that suggests the president was slow walking the response because he was very happy with what was happening over at the -- at the United States Capitol.

So I think once all that evidence is put on, there will be no choice but to convict.

"There is no comparison. This was an effort to overturn an election, in and of itself an unconstitutional endeavor. This was a crowd of tens of thousands of people. The president had access to intelligence to tell him that there were individuals there who were intending to storm the Capitol. And then, once again while the attack was happening, the president had the ability to turn them around and he didn't,” Murphy said.

“And, frankly, there's a lot of Republicans that feel differently. I think the conviction will be a bipartisan vote.”

But Sen. Paul told Wallace, he believes there is "zero chance of conviction." "Forty-five Republicans have said it's not even a legitimate proceeding, so it's really over before it starts.

“As far as witnesses, I think (it's) unlikely to be witnesses. If they do want witnesses, there's going to be so much evidence that the president had nothing to do with this; it was planned previously on Facebook, the bombs were planted the night before. People were attacking the Capitol who weren't part of the speech, they were already attacking the Capitol while he was just beginning to give the speech down there. There's all kinds of evidence that goes against them."

Paul also noted that the FBI is investigating people "for plotting this in advance."

Paul said he hopes the trial is over quickly, "because it's really bad for the country, so I'm for getting it over within a couple of days and moving on. And look, let's debate policy and let's quit sort of just all this craziness that everything has to be about attacking President Trump."