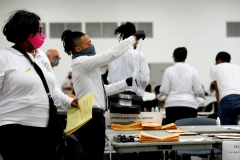 (CNSNews.com) - Six states -- North Carolina, Georgia, Pennsylvania, Nevada, Michigan and Wisconsin-- are considered too close to call on this day after the election,  and with delayed ballot-counting in some of those states, it may be days before some of those races are called for either Donald Trump or Joe Biden.

North Carolina will accept mail-in ballots postmarked Nov. 3 until Nov. 12; and Nevada announced it won't resume its vote-counting until tomorrow.

"I am just very concerned about what they're trying to do with those mail-in ballots," Sen. Marsha Blackburn (R-Tenn.) told Maria Bartiromo Wednesday morning.

"Maria, I served on my county's election commission before I was elected to the State Senate. And I have to tell you, I am absolutely astounded that these states have stopped counting ballots. I mean, I hope they are not casting ballots and trying to change the result.

There are plenty of watchers and attorneys that are out there, and everyone is keeping a close eye on this. But to stop the count -- stop it -- and close the room. And then there better be somebody in that room from each side of this that are watching those ballots, because to stop it, to take a day off?  Who has ever heard of that? Taking a day off to wait and go count some ballots.

Because -- I don't know. It's unprecedented. But what we want to make certain is, the integrity of the election is preserved, the one-person, one-vote is preserved. And for them to do this when they know the whole country is watching is unbelievable...

You know, when you look at the trend lines in Georgia, North Carolina, we feel pretty good about holding the Senate. It looks likes that's going to stay in Republican hands. That is very good for us. John James is on track to pick up that (Republican) seat in Michigan and join us in the U.S. Senate. That is very good.

And I've been so pleased that the (Republican) House pick-ups are women, and I'm thrilled for Nancy Mace (S.C.) and Yvette Herrell (N.M.) and Stephanie Bice (Okla.). And these are great wins for the Republican Party.