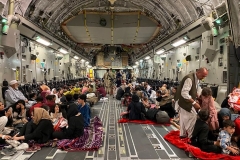 Afghan people board a U.s. military aircraft to leave Afghanistan on August 19, 2021 after the Taliban's takeover of Afghanistan. (Photo by SHAKIB RAHMANI/AFP via Getty Images)

(CNSNews.com) - "I don't think the American people understand the peril that Joe Biden has put us in," Sen. Ben Sasse (R-Neb.), a member of the intelligence committee, told Fox Radio's Guy Benson on Thursday.

Sasse is particularly concerned about the Americans and our Afghan allies prevented by the Taliban from getting to the Kabul airport – and the U.S. military having no plan to go get them.

“This is about how a superpower ceases to be a superpower in the eyes of the world, by having no moral coherence about what we're doing and the pledges we've made,” Sasse said.

Sasse said the airport has a single runway right now: “That means that a single Talibani fighter with an RPG can turn this into a legitimate hostage situation by downing a plane on the tarmac."

He said the U.S. military should expand the security perimeter beyond the airport in Kabul, but military leaders apparently are unwilling to challenge Biden on that point.

"What we lack is the will," Sasse said. He accused Biden’s team of treating a national security crisis like a P.R. crisis.

Defense Secretary Gen. Lloyd Austin told reporters on Wednesday the U.S. military doesn't have the "capacity” to "extend operations" into Kabul to rescue stranded Americans and our allies, as the French and British troops are doing:

"It is completely ridiculous, it's a false statement," Sasse fumed:

We need military leaders to stop acting like politicians and to tell the truth, and then let political officials who are elected be held accountable for the policy choices they make.

But to claim that we don't have the capacity is simply not true. And the moral imperative in this moment when we've got thousands and thousands of Americans still well beyond the airport, well beyond the wire who can't get there, and we have an administration, we have a State Department sending notices out to Americans in Kabul saying we cannot guarantee your safety getting here. But the Taliban has said you'll be getting free access to the airport.

Trusting the Taliban to get access to the airport is like trusting Hitler to give access to the beaches of Dunkirk. This is insane and the American military needs to be directed. They need to be given the power and the authority to either expand the perimeter around Karzai Airport right now past these -- pass them through these Talibani checkpoints that are keeping people from being able to get to the airport, or what we need to retake Bagram Air Force Base.

This is one of the great wonders in all of U.S. history, that this administration directed us to abandon the airfield that was secure and that provided the support, not just for this evacuation, obviously -- I'm strongly against this decision to withdraw.

But the debate we're having here is not about the decision to withdraw; we're talking about the just completely incompetent execution of this that has put at risk thousands and thousands of Americans and 60 to 80,000 of our Afghan allies who are not abstract people.

These are individual humans and families and moms and dads that are at the wire at the airport with children at their knees. And they came to that airport because we guaranteed their security because they fought alongside us against a common enemy.

These people are at that airport because we promised we would never just cut and run. I'm hearing from U.S. troops constantly who fought over the last 20 years in Afghanistan, and they're saying I gave my word on behalf of the United States government and people because my commander said we would never just bail on these people -- these interpreters, these drivers, these co-belligerents who fought alongside us.

They were helping us take the battle against the Taliban and al-Qaeda from Manhattan to the battlefields where these people were given a safe haven to plan these kinds of attacks.

We owe it to these people to keep our word, and right now we have a commander-in-chief who thinks he's dealing with a couple of media cycles, and that this will just go away in two weeks.

This is about how a superpower ceases to be a superpower in the eyes of the world by having no moral coherence about what we're doing and the pledges we've made.