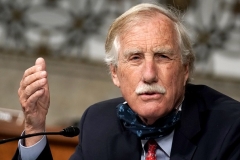 (CNSNews.com) - Trump critics say the president is putting the country in danger by refusing to concede the election to Democrat Joe Biden; preventing the transition from proceeding; and firing Defense Secretary Mark Esper and installing Chris Miller, a former Green Beret and counterterrorism expert, in Esper's place.

Sen. Angus King (I-Maine) told CNN on Thursday that the change in leadership at the Pentagon may mean that Trump is contemplating a last-minute, "unilateral, 100 percent pullout from Afghanistan."

"That's the dangerous thing that I think that a lot of people are worried about," King said. "If I had to put money on it, that's what I would predict was going to happen."

King said every day of delaying the transition puts the county in more danger. "And to stand back and allow the decapitation of the Defense Department in the middle of the transition, it's just, you know, it's pretty shocking, as you can tell. I'm not usually speechless, but this is -- this is putting the country at risk."

"Why do you think the president has done this?' CNN's John Berman asked King:

Well, there are a couple of possible explanations. One is just personal pique. He didn't like it that Mark Esper stood up to him last year when he was making noises about sending troops into American cities. And, you know, the issue is disloyalty. That's what I heard. I talked to some people and said, what's going on here. Disloyalty.

Well, the problem is, when Mark Esper took his oath of office, it wasn't to Donald Trump. It was to the United States Constitution. And the president -- you remember, he said, 'My generals?' They aren't his generals, they're the United States of America's generals. And he mistakes personal loyalty to, you know, doing your job. This is the first administration in history where the most likely way to get fired is to do your job. So one is personal pique at Mark Esper.

The other is, and this is more worrisome, is a desire to sort of clear the way for making major decisions in national security matters without any pushback, without any back talk from those pesky people at the Pentagon who take their job seriously.

What I'm hearing is the possibility of a unilateral, 100 percent pullout from Afghanistan, which by the way, John, would be very dangerous. We have an important counterterrorism mission there. Al Qaida and ISIS are still active. And if we pull out our troops unilaterally, between now and Christmas or whatever the date is, that mission is essentially compromised, and we're right back where we were in 2001, subject to a terrorist attack being hatched in the Wilds of Afghanistan.

That's the dangerous thing that I think that a lot of people are worried about. If I had to put money on it, I'd predict that's what's going to happen.

King said if President Trump wants to challenge the election outcome in swing states, "he can do so."

"But as the same time, you can do the transition, you can allow the daily briefings so that the President-elect will have the information necessary. This is a moment of vulnerability. The transition, any transition, is a moment of vulnerability when our adversaries look to take advantage. And this is being done for, as I say, no reason except for apparently it's sort of the pique of the president, and it's dangerous. It's just downright dangerous for national security."

Republican Sen. James Lankford, an Oklahoma Republican, made news on Wednesday when he said he'll press for Joe Biden to start getting presidential intelligence briefings if the Trump administration hasn't started providing them by Friday: "There is no loss from him getting the briefings," Lankford said. "This needs to occur so that regardless of the outcome of the election, whichever way that it goes, people can be ready for that actual task."

King praised Lankford for speaking out;

"But he ought to be joined by all of his colleagues, by people that are involved in national security."

King said his message to his Republican colleagues is, "Do they really want, at this dangerous time, for their legacy to be silence? Everybody knows that this election is over.

“This discussion of the various ballots and fraud, there's been no allegation where it's risen to the level of even coming close to overturning one of the elections. If Pennsylvania stays and Biden's lead is now over 50,000 votes, the election is over. It doesn't matter what happens in Georgia or Arkansas -- or Arizona or Nevada. So, it's not going to change. So my colleagues, by being silent, are just -- they're not serving the country."