Schumer: Same-Sex Marriage Bill 'Is Personal to Me'; But Conservatives Lament 'Anti-Family Policies' 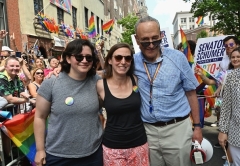 (CNSNews.com) - "As you know, this is personal to me," Senate Majority Leader Chuck Schumer (D-N.Y.) said shortly before the Senate passed the "Respect for Marriage Act," codifying homosexual marriage (and, incidentally, interracial marriage).

Schumer told a news conference on Tuesday that after Supreme Court Justice Ruth Bader Ginsburg died in 2020, "we were at a family dinner. And my daughter and her wife were distraught and asked me, 'Could our marriage be undone?'

“Today, a new day has come for them. In -- and in the new year, they'll be welcoming their first child, my third grandchild, God willing, in a few months.

"With the passage of this bill, though, I think not just about them and the millions of Americans it'll impact, but about my future grandchild. That child will now grow up in a more accepting, inclusive, and loving world, a world that will honor their mothers' marriage and give it the dignity it deserves."

The bill passed 61-36. The House has already passed a similar bill, and President Biden said on Tuesday he looks forward to "promptly and proudly" signing it into law.

Family Research Council President Tony Perkins says the legislation "is a threat to the First Amendment freedoms of individual Americans."

"And yet 12 of 12 Republicans still chose to vote for the (Dis)Respect for Marriage Act," he said, which "makes people prime targets for government harassment, investigation, prosecution, even civil action.

"This bill is a club, with which the Left will attempt to beat people of orthodox faith -- who believe in marriage as God designed it and history has defined -- into submission to their destructive sexuality ideology."

Perkins said his experience as a former chairman of the U.S. Commission on International Religious Freedom showed him that the greatest threat to religious freedom is not a military force, but policies such as those passed by the Senate on Tuesday:

"They are what curtails the exercise of religious freedom -- which leads not to a violent overthrow of this fundamental freedom, but to its systematic suppression and eventual loss. In other words, the government has declared open season on anyone who believes in marriage as it's always been, the union of a man and woman.

"We know what is right. We know what is true. Whether by the Court or by the Congress, truth cannot be altered. We need to have the courage to stand for it, remembering the words of the Apostle Paul in Ephesians 6, 'and having done all...stand firm.' These words apply so directly to us, we will continue to stand."

The Alliance Defending Freedom issued a statement, calling the "deceptively named Respect for Marriage Act" "dangerously cynical and completely unnecessary" and a direct attack on the First Amendment."

"It does nothing to change the legal status of same-sex marriage anywhere," said ADF Senior Vice President of Strategic Initiatives Ryan Bangert.

"But it undermines religious freedom everywhere and exposes Americans throughout the country to predatory lawsuits by activists seeking to use the threat of litigation to silence debate and exclude people of faith from the public square.

"Today, the Senate has chosen to disregard legitimate concerns about the undeniable harms of this bill. If the Senate truly cared about protecting religious freedom, it would have included comprehensive amendments proposed by Sens. Lee, Rubio, and Lankford.

“ADF remains committed to ensuring the First Amendment protects the rights of all Americans and to defending those who will likely be targeted because of this legislation.”

"Today the Senate, including 12 Republicans, voted to undermine religious freedom and expose Catholics to debilitating lawsuits brought by those seeking to silence our voices in the public square.

"Those in Congress who dismissed legitimate warnings about this bill and the harms that would be caused by it must be held accountable.

"This bill was designed from the start as a political weapon for leftwing activist groups to harass and shut down conscientious Americans who hold fast to the time-honored institution of marriage.”