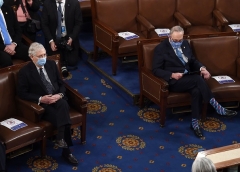 (CNSNews.com) - In a taped interview with MSNBC's Rachel Maddow that aired on Monday night, Senate Democrat leader Chuck Schumer said no -- no way, "we will not let Mitch McConnell dictate to us what we will do and not do. Period."

Schumer was talking about McConnell's insistence that the Senate filibuster -- the 60-vote threshold -- must be preserved in exchange for Republicans agreeing to a power-sharing agreement in the 50-50 Senate.

As the Schumer interview aired at 9 p.m., McConnell issued a statement saying, "I look forward to moving ahead with a power-sharing agreement," given the "assurances" that two Democrats -- Sens. Joe Manchin and Kyrsten Sinema -- have "publicly confirmed that they will not vote to end the legislative filibuster."

So McConnell is relying on the word of two Democrats.

Schumer, however, said his Democrat caucus "is united" in the belief that "we must get big, strong, bold things done.

Point two, we will not let Mitch McConnell dictate to us what we will do and not do. Period. And these first five days have shown that. And as I said, my caucus is totally united from one end to the other that we're not letting him go forward.

Our hope is, now, we have tools that we can use. Reconciliation. We can get a lot of the COVID bill done with reconciliation (51 votes for passage). And that's something we certainly will use if they try to block this immediate COVID bill.

We can even use reconciliation for a much broader proposal. Biden's bill did back better which obviously would be modified and changed. So we have some tools we can use right now and will not hesitate to use them if Republicans continue to just block.

Later in the interview, Schumer listed some of his priorities for the Democrat-majority government:

"I think it might be a good idea for President Biden to call a climate emergency," Schumer said. "Then he can do many, many things under the emergency powers of the president that wouldn't have to go through -- that he could do without legislation.

In addition to "bold climate legislation," Schumer said his legislative priorities include lessening "economic and racial inequality," passing "immigration reform," including a pathway to citizenship for millions of people who came here illegally, and "dealing with infirmities in our democracy."

Schumer explained those infirmities as "getting rid of those horrible decisions like Shelby, which made it easier to block people's right to vote; in fact, automatic voter registration is part of it. Getting rid of Citizens United is part of it. That's a great bill," he said about H.R. 1 which is also S.1. "Has a lot of different parts.

"But those are the three stools -- democracy, climate, economic/racial inequality, lessening them."

McConnell's full statement agreeing to move forward on a power-sharing agreement without a guarantee to preserve the filibuster reads as follows:

Today two Democratic Senators publicly confirmed they will not vote to end the legislative filibuster. They agree with President Biden’s and my view that no Senate majority should destroy the right of future minorities of both parties to help shape legislation.