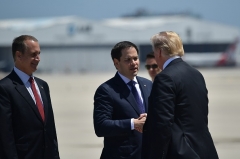 Sen. Marco Rubio (R-Fla.) greets President Donald Trump on one of Trump's many visits to that state. (Photo by MANDEL NGAN/AFP via Getty Images)

(CNSNews.com) - Sen. Marco Rubio (R-Fla.) is among the Republicans who oppose holding an impeachment trial for a president who has left office:

"Well, first of all, I think the trial is stupid," Rubio told "Fox News Sunday."

I think it's counterproductive. We already have a flaming fire in this country and it's like taking a bunch of gasoline and pouring it on top of the fire.

Second, then I look back at the time, for example, Richard Nixon, who had clearly committed crimes and wrongdoing, and in hindsight, I think we would all agree that President Ford's pardon was important for the country to be able to move forward. And history held Richard Nixon quite accountable for what he did as a result.

But I just want to repeat, I think this is going to be really bad for the country. It's going to take us -- not just is it going to keep us from focusing on really important things, but it's also just going to stir it up even more and make it even harder to get things done moving forward.

Rubio said although he opposes an impeachment trial, he does think Donald Trump "bears responsibility for some of what happened" at the U.S. Capitol on January 6.

It was most certainly a foreseeable consequence of everything that was going on. And -- and I think that's widely understood, and maybe even better understood with the perspective of time. I think that's separate from the notion of, let's revisit this all and stir it up again.

All I'm arguing is, we have some really important things to work on. You want to really kind of bring the country together and remember once again how we can get things done, it isn't by uniformity on all the issues, it's about working through a process that allows people with different points of view to debate all that and get to a solution for the country.

All that -- we're just going to go -- we're going to jump right back into what we've been going through for the last five years and stirring it up again with a trial. And it's just going to be bad for the country. It really is.

Rubio said he definitely would vote to end the trial on procedural grounds -- that it's unconstitutional to try a president who has left office.

"Yes, the first chance I get to vote to end this trial, I'll do it because in think it's really bad for America. If you want to hold people accountable, there's other ways to do it, particularly for a president, including, as I said, the perspective of history and even now as people are learning more about all of this.

"But it's really bad -- when you talk about situations like this, this is not a criminal justice trial, this is a political process and ultimately it is a political process that's going to inject things into our public discourse, into a debates, that's going to make it harder to get important things done, and it's just going to continue to fuel these divisions that have paralyzed the country and have turned us into a country of people that hate each other."