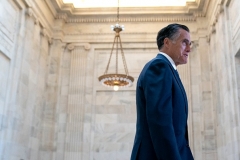 (CNSNews.com) - Mitt Romney (R-Utah) is among the bipartisan group of senators who worked with the Biden White House to produce an agreement on physical infrastructure.

On Sunday, Romney said he is "totally confident" that President Biden will sign the bill, even if it comes to his desk alone, without the second, much-bigger "human" infrastructure package arriving at the same time.

Biden on Thursday said if the bipartisan plan was the only one to reach his desk, "I'm not signing it." That upset Romney and other Republicans, who said there was no agreement to link the two plans -- to pass them both "in tandem," as Biden insisted several times.

So on Saturday Biden issued a statement, saying he understands why Republicans were upset, and leaving it up to Congress to decide how the two infrastructure packages will be handled:

"At a press conference after announcing the bipartisan agreement, I indicated that I would refuse to sign the infrastructure bill if it was sent to me without my Families Plan and other priorities, including clean energy," Biden said. "That statement understandably upset some Republicans, who do not see the two plans as linked...My comments also created the impression that I was issuing a veto threat on the very plan I had just agreed to, which was certainly not my intent.

"So to be clear: our bipartisan agreement does not preclude Republicans from attempting to defeat my Families Plan; likewise, they should have no objections to my devoted efforts to pass that Families Plan and other proposals in tandem. We will let the American people -- and the Congress -- decide."

CNN's Jake Tapper asked Romney on Sunday, "Is that good enough for you? Do you buy his new explanation?"

"Well, I do take the president at his word," Romney said:

As you know, it is true infrastructure, bridges, roads, rail, electric utility support, and so forth, and without raising taxes. And so this is a bill which stands on its own.

I am totally confident the president will sign it if it comes to his desk. The real challenge is whether the Democrats can get their act together and get it on his desk. And I think the battle that's going on is not with Republicans. Republicans are going to support true infrastructure that doesn't raise taxes.

But Democrats want to do a lot of other things. And I think they're the ones that are having a hard time deciding how to proceed.

Romney noted that it's up to Democrats to bring legislation to the floor. And House Speaker Nancy Pelosi said last Thursday the bipartisan bill will not be brought to a vote in the House until the Senate passes the second, much bigger "American Families Plan" through budget reconciliation.

(That is essentially what Biden said on Thursday, when he announced that he wouldn't sign the bipartisan bill unless he got everything else in a "tandem" reconciliation bill.)

Romney said he believes Republicans would support the bipartisan compromise if it comes to the floor.

"But it's not our choice. Whether or not this legislation comes to the floor is up to Chuck Schumer, and, to a degree, of course, Nancy Pelosi -- the House, and they will make that decision," Romney said:

And if they allow this bill to come to the floor, it will surely be supported by the White House and by a number of Democrats, as well as by Republicans, it'll get passed, and the president will sign it.

But if they say, no, we're not going to let it come to the floor unless we get trillions of dollars of other stuff and a huge tax increase, why, they're going to face some real challenges.

So, the real -- the real, I think, challenge right now is among the Democrats. What are they going to do? Because I don't know that they're all in line for a big tax increase. I don't think the American people want to see that.

Asked if he trusts President Biden, Romney said he does:

I do trust the president. And he made very clear in the much larger statement that came out over the weekend, carefully crafted and thought through piece by piece, that, if the infrastructure bill reaches his desk, and it comes alone, he will sign it.

At the same time, I recognize that he and his Democrat colleagues want more than that. They want other legislation as well. And we Republicans are saying, absolutely no, we will not support a bill which is to be passed with a massive tax increase and at the same time trillions of dollars in new spending. That is not something we will support.

But fixing the infrastructure in our country, fixing our airports and our roads and bridges, transit system, rail, those are the kinds of things we will support. Don't raise the taxes, fix infrastructure, we can get the job done.