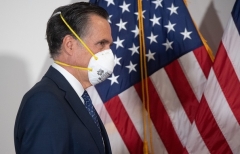 Senator Mitt Romney (R-Utah) was the only Republican to vote to convict Trump of abuse of power at Trump's first impeachment trial. (Photo by SAUL LOEB/AFP via Getty Images)

(CNSNews.com) - Sen. Mitt Romney (R-Utah), never a Trump supporter, sounded a lot like Senate Majority Leader Chuck Schumer (D-N.Y.) on Sunday when he was asked about the impeachment of former President Donald Trump.

I wish that weren't necessary, but the president's conduct with regard to the call to the Secretary of State Raffensperger in Georgia, as well as the incitation towards the insurrection that led to the attack on the Capitol calls for a trial and the -- you know, if we're going to have unity in our country, I think it's important to recognize the need for accountability, for truth and justice.

So I think there will be a trial, and I hope it goes as quickly as possible, but that's up to the counsel on both sides.

Schumer used some of the same words in a speech on the Senate floor last Friday:

"The January 6 insurrection at the Capitol incited by Donald J. Trump was a day none of us will ever forget," Schumer said.

"We all want to put his awful chapter in our nation's history behind us. But healing and unity will only come if there is truth and accountability, and that is what this trial will provide."

Romney said on Sunday he will wait to hear the arguments on both sides before deciding whether to convict Trump.

"But I think it's pretty clear that over the last year or so, there has been an effort to corrupt the election of the United States, and it was not by President Biden, it was by President Trump," he said.

"And that corruption we saw with regards to the conduct in Ukraine as well as the call to Secretary of State Raffensperger as well as the incitation to insurrection. I mean, this is obviously very serious and an attack on the very foundation of our democracy, and it is something that has to be considered and resolved."

Romney said he "concurs" with those who say it is appropriate to hold an impeachment trial for someone after they have left office, and he said he doubts a Republican effort to drop the impeachment trial on constitutional grounds would succeed.

"But again, I will listen to the arguments that are made by counsel on both sides to make a final determination," Romney said.