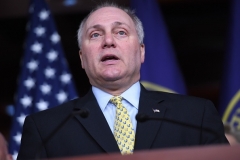 (CNSNews.com) - They say politics makes strange bedfellows, and perhaps none would be stranger than far-left Rep. Alexandria Ocasio-Cortez (D-N.Y.) joining conservative Republicans in their push for an America-first agenda.

Because think about this, Laura, the Chinese Communist Party could not have drawn up a better plan to destroy the economies of Europe and America than the Paris accord. First of all, there's not one country in Europe in compliance, and they exempt China until 2030.

So China literally gets to wreck economies in the United States and Europe, take those jobs, and by the way, if you're concerned about carbon emissions, China emits five times more carbon for making the same stuff we make in America because we actually have good environmental standards.

Plus, what the Paris accord would do would be to increase the cost of electricity for household families in America -- which, by the way, hits the lowest income people the hardest. It would destroy manufacturing jobs, which are those blue-collar jobs you talked about. So she should join us in standing up for workers, standing up for low-cost energy, and opposing the Paris accords.

A big priority, obviously for her and Progressives, the Green New Deal. Well, guess what is critical to their utopian vision of the Green New Deal -- I don't agree with all of it -- but battery storage is critical. Who controls 90 percent of the world's battery production and the raw materials, Lithium, cobalt and other? China does.

For a lot of their vision that progressives want to see move forward, we can't have the dependency on China, and we can't have the human rights abuses that come along with it, the labor abuses that come along with it, their strip-mining our oceans, their dumping plastic -- from environmental to human rights to manufacturing back at home, there are all kinds of things that we can and should be working on.