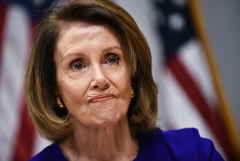 Rep. Nancy Pelosi, now Speaker of the House, sounded optimistic on Sunday about reaching an "agreement" on a framework for the Democrats' social infrastructure plan. (Photo by MANDEL NGAN/AFP via Getty Images)

(CNSNews.com) - Even at half the $3.5-trillion cost, "it's a very big bill," House Speaker Nancy Pelosi said of the Democrats' social agenda/entitlement plan.

"In terms of where we are, I have said already we have 90 percent of the bill agreed to and written," Pelosi told CNN's "State of the Union" on Sunday. "We just have some of the last decisions to be made. It is less than we had -- was projected to begin with, but it's still bigger than anything we have ever done in terms of addressing the needs of America's working families.

"And it is about all that you said in terms of care, the care piece. But it's also about the climate piece, which is a health issue, a jobs issue, a security issue, and a values issue for us. And we will have something that will help meet the -- that will meet the president's goals. I feel very confident about that, even though it will be different than what we originally proposed."

Host Jake Tapper asked Pelosi if Democrats will have a deal by the time Biden leaves for the climate summit in Scotland next week:

"I think we're pretty much there now," she said. She said progressives will not vote for the bipartisan infrastructure bill unless an agreement is reached on the "human" infrastructure framework.

Tapper followed up, asking: "So, are you saying, in the next week, the framework will be agreed to, or there will be a deal, on the social safety net bill?"

"An agreement," Tapper responded. "There will be an agreement on that. And you will also vote for the bipartisan infrastructure bill? Both of those things will happen in the next week?"

Appearing on "Fox News Sunday," Rep. Ro Khanna (D-Calif.), a member of the House Progressive Caucus, told host Chris Wallace "it's likely" that Congress will agree on both infrastructure bills this coming week.

"Chris, it's likely. You could hold me to it, I guess. Here's the thing, the president looked us in the eye, and he said, I need this before I go represent the United States in Glasgow. American prestige is on the line. Many members understand that. We're working very hard to get a deal. I understand we're close, and I'm confident we're going to get there."

But Khanna said "no," he would not approve the bipartisan bill if there is no agreement on the larger "human" infrastructure bill:

"And the president doesn't want that. The president needs the reconciliation agreement to go to Glasgow. That's what is going to deal with climate change, that's what's going to hit his goals of 50 percent reduction by 2030. I'm confident we will have an agreement. I'm confident that the president will be able to give his word to the House caucus that he has that agreement, and that would then facilitate the vote on the (bipartisan) infrastructure bill."

Wallace quoted Pelosi's comment that Democrats soon may reach "agreement" on the larger bill. "Would that be enough for you?" he asked Khanna:

"Well, the details matter. My view is that the president's word, saying I have the commitment of 50 senators, and those 50 senators are going to vote for this bill and here is the -- are the details, that that's good enough.

"But, look, different numbers have different issues about what is exactly good enough. I don't think proceduralism will hold us back. If the president gives his word and has a clear commitment, that will be good enough."

Sen. Kyrsten Sinema (D-Ariz.) -- whose vote is necessary for the reconciliation package to pass -- opposes raising tax rates on wealthy Americans and corporations, so Democrats are looking at other ways to pay for the agenda package. That includes a "wealth tax" on billionaires:

"We probably will have a wealth tax," Pelosi said on Sunday.

Khanna agreed: "I do think the wealth tax makes sense, Chris. And, as I mentioned, I think last time I was on, it would be paid largely by people in my district, Silicon Valley billionaires who -- our wealth has gone up 40 percent during the pandemic, $11 trillion of market cap in our area, they can afford to pay a wealth tax.

"But I guess my question for Senator Sinema is, she voted against the Trump tax cuts and I just don't understand why she's not willing then to raise some of the rates back to what they were before the bill she voted against was. And she hasn't explained it to anyone."

Both Khanna and Pelosi said the wealth tax (taxing unrealized capital gains -- before an asset is sold) won't be enough to pay for all the social programs they want to introduce. "It would have to be coupled with this minimum tax, which the president has talked about, that there are about 50 corporations that are paying zero percent in taxes, and they would have to pay at least 7 percent in tax," Khanna said. "So Amazon would have to pay 7 percent. If you had both of those and you raised the revenue, I would vote for it."

Khanna said he would prefer to raise the corporate tax rate. "But if we can raise the revenue in these two other ways, I'm not going to vote against the bill if we can get the alternative through alternative means, especially when I believe a wealth tax and a corporate minimum tax are also good measures..."

Khanna said the "reality" is that if all 50 Democrat senators can agree on something, "I don't think you're going to have the House vote against it. So, if the president represents that 50 senators are on board with the framework, he'll have the House. Now, if there's a holdout, if progressive senators are opposed to it, then there's a problem."