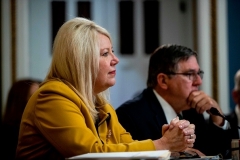 (CNSNews.com) - On April 2, House Speaker Nancy Pelosi announced her intention to form a bipartisan "Select Committee on the Coronavirus Crisis," to be chaired by Majority Whip Jim Clyburn (D-S.C.).

Today, the House will vote to approve that new oversight committee, despite objections from Republicans.

"This isn't about assigning blame," Pelosi said on the House floor Thursday. She said the committee "will ensure the historic investment of taxpayer dollars are being used wisely and efficiently and nobody is ripping us off. Where there's big money -- we know this -- people will come up with a scam of some kind."

But Rep. Debbie Lesko (R-Ariz.) is calling "B.S." She said rooting out financial abuse is not the real purpose of the new committee:

"Why do we need another oversight committee?" Lesko asked on Thursday, in a speech on the House floor:

Speaker Pelosi said, it's going to be all bipartisan. I'm sorry, I don't believe it. And the reason I don't believe it is because since the beginning of 2019, I have served on three committees, including the Judiciary Committee, and in every single committee, the entire goal has been nonstop to criticize President Trump and try to influence the 2020 election.