Reps. Jordan and Zeldin: 'We Should Be...Working for the People. Instead We're Sitting at Home' 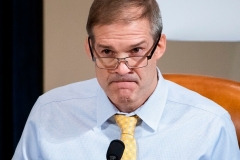 (CNSNews.com) - The American people "instinctively" know it's wrong for the House of Representatives to remain out of session in the midst of the national coronavirus and unemployment crisis, Reps. Jim Jordan (R-Ohio) and Lee Zeldin (R-N.Y.) told Fox News's Laura Ingraham on Monday night.

“I said today, farmers are planting, truckers are moving goods, grocers are stocking shelves and frontline health workers have not missed a day, but somehow the U.S. House can't go back in session?" Jordan said.

“That's what we should be doing--working for the people. Instead we're sitting at home,” Jordan said.

House Speaker Nancy Pelosi (D-Calif.) has returned to Washington, but she and House Majority Leader Steny Hoyer (D-Md.) decided last week not to bring the full House back. They pointed to advice from the House physician, amid the rising number of COVID-19 cases in the Washington area.

And here, the Speaker’s just concentrating so much power in herself, inside her gavel right now,” Zeldin said.

“Because she’s actually right now writing a bill, a next bill, a trillion-plus, billion -- whatever that number ends up being. It’s going to be huge.

“It’s filled with her partisan priorities, and we’re not there, part of that process of going through committee and hearing ideas and debating topics and learning about what we need to do better about money that was spent in these last few bills.”

Zeldin also pointed to the months Democrats wasted on Trump's impeachment -- "Where the House was trying to bring down the presidency."

"And right now, in a way, we're embarrassing ourselves even more,” Zeldin said.

“We've found a new way to reach an even further low, because as Jim just pointed out, there are all these people who have been deemed essential who are busting their butts, and they are doing their jobs, and here you have the masses in the House of Representatives who want to get to work."

Senate Republican leader Kevin McCarthy also has noted that with most lawmakers at home, a "select group of leadership and staff" is making decisions, reducing the role of representatives to "merely voting 'yea' or 'nay' on pre-drafted proposals."

Zeldin said if any House member cannot return to Washington for some reason, "that's one thing. But the rest of us are ready to go."