Rep. Van Drew: 'If I Didn't Know Better, I Would Literally Believe That There Is Almost a Conspiracy to...Destroy America' 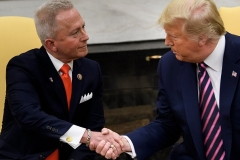 Rep. Jeff Van Drew of New Jersey switched from the Democratic Party to the Republican Party in 2019. He is seen here, shaking hands with then-President Donald Trump. (Photo by BRENDAN SMIALOWSKI/AFP via Getty Images)

(CNSNews.com) - "We are literally destroying ourselves as a nation," Republican Rep. Jeff Van Drew of New Jersey told Fox Business on Thursday morning.

Van Drew, who sits on the House Homeland Security Committee, listed a number of issues that concern him: the open border, the potential for Russian cyberattacks, the lying corporate media, soft-on-crime politicians, and inflation.

And now Democrats are trying to "buy the election," he warned, with their plan to pass a bill that would send monthly stimulus checks to lower-earning Americans for the rest of the year, in any month where the national gas price average exceeds $4.00 a gallon.

"I don't think at the end of the day it is going to work," Van Drew said of the proposed stimulus payments.

"I think they're (Democrats) trying to buy the election. They're trying to do anything that they can, I mean, because at the same time they're doing that, let's talk about New Jersey for a second.

"Our (Democrat) governor is releasing prisoners, is releasing violent offenders on a regular basis, hundreds and hundreds, thousands, actually, and people know that. Our jails are being emptied out, and it's like a revolving door. We put them in jail, we let them right out.

Host Maria Bartiromo asked Van Drew about the Biden administration's plan to end Title 42, the public health measure that has kept at least some illegal immigrants out the country during the COVID pandemic. If the Centers for Disease Control and Prevention lifts the order next month, as expected, "it's going take a terrible situation and make it even worse," Van Drew said:

"I mean, it was used not only by President Trump but it has been used by President Biden, but he is so trying to appeal to the ultra-left, to the ultra-progressive parts of his party, that he doesn't even care what happens to the country.

"We have 400,000 alone undocumented illegal -- we don't even know where they are, or what they're doing. We're spreading them all over the country, the ones that we do know and literally in the middle of the night when people don't even know what's going on.

"Our America, you know, the people who live here obviously should be aware of what is happening and what is going on. Fifty percent at least -- over 50 percent of those that we have encountered we have sent back immediately, thank God, and it's still been a terrible human disaster. And now we wouldn't even be doing that. They just want to open the borders, the president, and others, and the Democrats, more and more and more.

"I don't know what their goal is other than to completely change the United States of America...For us not to have an intact, strong border, by the way, with a wall, is insane. It's crazy-land."

Van Drew said it should "scare folks" that the leftist corporate media is ignoring the crisis at the border. "Imagine an America where you don't, through the media, even get the truth. It's unbelievable," he said.

The U.S. Border Protection agency recorded 164,973 "encounters" with illegal immigrants in the month of March alone.

The CBP chart posted below shows the dramatic increase in illegal immigration since Joe Biden became president. And those numbers reflect only those foreigners who turned themselves in or got caught.