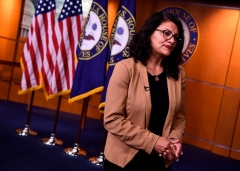 (CNSNews.com) - Rep. Rashida Tlaib (D-Mich.) has been and continues to be a vocal supporter of impeaching Donald Trump -- not necessarily for the crimes alleged, but for being a "crooked billionaire running his businesses out of the White House."

Appearing with Chris Hayes on MSNBC Tuesday night, Tlaib was asked about the Republican argument that Democrats, including Tlaib, have wanted to impeach Trump since he took office and kept looking for excuses to do so.

"I mean, I was right," Tlaib told Hayes:

This is a person that's been lawless. Not only that, it's a crooked billionaire running his businesses out of the White House. He was absolutely committing impeachable offenses. You know, this primary impeachment that you see before the Senate right now to convict him is for the violence on January 6th.

But for many of us, especially here in my district, we have saw (sic) that it was extremely corruptive that they were putting the Trump organization first. They were putting a for-profit organization, his businesses, before the people's business, and making sure that, again, folks were staying at the Trump Hotel to do all this.

And again, many of us didn't wait for him to bribe a foreign government, nor did we wait in the 13th congressional district for a white supremacist attack on our Capitol. We knew what he was about, and we called him out on it from day one.

I mean, Chris, from my district alone, they were intentionally trying to throw out black votes. Right here in Detroit. And so for us, it was extremely personal that they were trying to use white supremacist rhetoric, trying to use that kind of racist tone, and these conspiracy theories that led to the violence of January 6th.

And so Raskin is right, that this is extremely personal and extremely -- very much about us being able to keep our right to have a voice at all levels of government, and especially again, pushing back against that violence that we saw on January 6th.