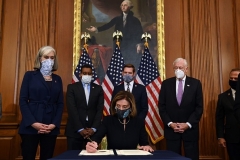 (CNSNews.com) - One of the Democrat impeachment managers indicated on Monday that President Trump's second impeachment trial will aim to stoke resentment among "black Americans."

Rep. Eric Swalwell (D-Calif.) told CNN's Jake Tapper the trial must proceed for the sake of "accountability," "deterrence," and "disqualification."

I don't like what our country would look like if we didn't do this, for the sake of accountability. I think of black Americans whose votes this president incited a crowd to go to the Capitol and disenfranchise.

Deterrence. It would only be in the final days of a presidency where you try and pull off a coup. So, we have to show that we will hold a president accountable all the way up to the last moments.

And disqualification. This president has such a disdain for public safety and for the Constitution that we don't ever want to see him in office again, because he would do this again. So, we have to try. And we have got the evidence, and we're going to make the best case.

Swalwell refused to reveal "trial tactics." He wouldn't say if the evidence includes a New York Times report that Trump considered replacing his acting attorney general with someone who was willing to "wield the (Justice) department’s power to force Georgia state lawmakers to overturn its presidential election results."

Swalwell did say the newspaper "evidence" mentioned by Tapper "is powerful motive evidence that he was willing to stay in office at any means necessary, that this was not a January 6 heat of passion crime, where he just got worked up in the moment and let the statements that he made about fighting and not showing weakness and calling the crowd a cavalry, that it wasn't just spontaneous, that for months, he wanted to hold onto power.

“And he knew that he could invite those supporters, inflame them, and then incite them to go to the Capitol.”

Swalwell would not say what witnesses the Democrats might call: "We're still waiting to see if the Senate will allow witnesses," he said.

"What I can say is, the senators themselves are witnesses, And (Nebraska Republican) Ben Sasse has given public statements about he called the White House and was told during the siege that the president was taking great delight in what was happening.

"So, this is an extraordinarily unique situation, where the jurors are witnesses and victims, and the crime scene also is the courtroom."

The other Republican name that came up in the interview was that of House Minority Leader Kevin McCarthy (R-Calif.), who spoke to Trump in the midst of the Capitol invasion, asking him to condemn the rioting and try to quell the violence.