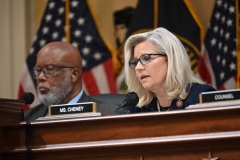 (CNSNews.com) - Rep. Liz Cheney, the Wyoming Republican who is working with Democrats to "protect" the nation from Donald Trump, says the January 6 committee on which she sits is not "political," and the committee's goal is not to knock Trump out of the running in 2024.

She told ABC's Jonathan Karl the Republican Party "can't survive if he's our nominee." And Cheney said she has not yet decided whether she will run for president in 2024. Her work with Democrats has put her congressional re-election in jeopardy.

In an interview that aired Sunday on ABC’s “This Week,” Jonathan Karl asked Cheney: "Do you see yourself running for president as a way to prevent what you say would be a destruction of the party -- and ultimately damaging our country?

"And I'll make a decision about '24 down the road. But I think about it less in terms of a decision about running for office and more in terms of, you know, as an American and as somebody who's in a position of public trust now, how do I make sure that I'm doing everything I can to do the right thing? To do what I know is right for the country and to protect our Constitution?"

Karl asked Cheney if the January 6 hearings have moved her closer to her previously stated priority of making Donald Trump "toxic and not a viable candidate."

"But I think it's also the case that there's not a single thing that I have learned as we have been involved in this investigation that has made me less concerned and I think there's no question, I mean, a man as dangerous as Donald Trump can absolutely never be anywhere near the Oval Office ever again."

Karl asked Cheney, "Can the Republican Party survive in the way you've known it if Donald Trump is again chosen?"

“Those of us who believe in Republican principles and ideals have a responsibility to try to lead the party back to what it can be and to reject so much of the toxin and the vitriol," she said.

Cheney said she doesn't intend to lose the August 16th Republican primary in Wyoming, although she faces a significant challenge from the Trump-endorsed candidate.

Cheney said it's important for her to win, "because I will be the best representative that the people of Wyoming can have.

“The single most important thing is protecting the nation from Donald Trump. And I think that that matters to us as Americans more than anything else, and that's why my work on the committee is so important and why it's so important to not just brush this passed, I think it's very important that people know the truth and that there are consequences."