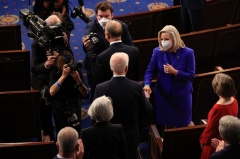 House Republicans say good riddance to Cheney, who voted in February to impeach Donald Trump, whom she accused of trying to steal the election and inciting insurrection. Many House Democrats used Cheney's own words to support their case for impeaching Trump a second time.

Meanwhile, the leftist, activist media is portraying Cheney as a hero, even a martyr to the anti-Trump crusade that still fills the airwaves and cable channels. For weeks, Democrats and the leftist media have showered Cheney with praise, using her to further split and weaken the Republican Party.

Cheney, defiant, delivered a not-so-subtle message to House Republicans leaders last month, when she was seen fist-bumping President Joe Biden on his way into the chamber to deliver a speech to a sparsely attended joint session of Congress.

And even after the vote to oust her, she said, "I will do everything I can to ensure that the former president never again gets anywhere near the Oval Office. We have seen the danger that he continues to provoke with his language. We have seen his lack of commitment and dedication to the Constitution. And I think it's very important that whomever we elect, is somebody who will be faithful to the Constitution." Cheney said she thinks the Republican Party "is in a place that we have to bring it back from."

On Tuesday, in her final speech as a Republican Party leader, Cheney said all lawmakers take an oath to "support and defend the Constitution," which means recognizing "threats to freedom when they arise."

Today, we face a threat America has never seen before – a former president who provoked a violent attack on this Capitol in an effort to steal the election has resumed his aggressive effort to convince Americans that the election was stolen from him. He risks inciting further violence.  Millions of Americans have been misled by the former president. They have heard only his words, but not the truth, as he continues to undermine our democratic process, sowing seeds of doubt about whether democracy really works at all.

I am a conservative Republican, and the most conservative of conservative principles is reverence for the rule of law. The Electoral College has voted. More than 60 state and federal courts, including multiple judges the former president appointed, have rejected his claims. The Trump Department of Justice investigate the former president's claims of widespread fraud and found no evidence to support them.

The election is over. That is the rule of law. That is our constitutional process. Those who refuse to accept the rulings of our courts are at war with the Constitution. Our duty is clear...Remaining silent and ignoring the lie emboldens the liar. I will not participate in that. I will not sit back and watch in silence while others lead our party down a path that abandons the rule of law and joins the former president's crusade to undermine our democracy...

...Attacks against our democratic process and the rule of law empower our adversaries and feed communist propaganda that American democracy is a failure. We must speak the truth. Our election was not stolen and America has not failed...