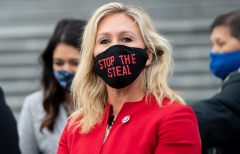 Rep. Marjorie Taylor Greene (R-Ga.) is photographed on the steps of the U.S. Capitol on January 4, 2021. (Photo by SAUL LOEB/AFP via Getty Images)

But I think the American people are tired of the double standard. Look, go back to the tragic and terrible things that happened on January 6th. Republicans condemn all political violence all the time. We condemn the terrible things that happened on January 6th, and the loss of life -- Mr. Sicknick and his family, who we all are thinking about and praying for this evening. We condemn all of that violence that took place on the 6th.

We didn't say that that individual should be kicked off of their committees. So, look, that's between the member and the people they get the privilege of representing in their district. That's a question for them. And if the folks in their district think that that's not appropriate, they're going to vote him out of office here in 21 months when we have our next election. That's the appropriate way to handle.

When you start having the swamp decide who gets to serve where and not the people across this country in their respective districts, that's a dangerous road to head down and a dangerous precedent to set. But that's about -- that's where the Democrats are thinking about going, and it will not be healthy for the institution. More importantly, it won't be healthy for the country.

The Democrat-led House Rules Committee today is taking up a resolution to remove Greene from two committees "in light of conduct she has exhibited."

Greene met with House Republican leader Kevin McCarthy (R-Calif.) on Tuesday. Press reports said he is considering removing her from the Education & Labor Committee if she doesn't step down.

Greene tweeted on Wednesday: "No matter what @GOPLeader does it would never be enough for the hate America Democrats. As much as he genuinely tries to work with @SpeakerPelosi for the good of this country, she refuses to see the hypocrisy of her own conference."

Greene has come under fire for some of the comments and opinions she's aired on social media before taking office -- speech that Senate Republican leader Mitch McConnell called "looney lies and conspiracy theories."

She is a staunch supporter of former President Donald Trump, and partisan cable outlets are giving her plenty of unflattering coverage as a way to tarnish all conservative Republicans.