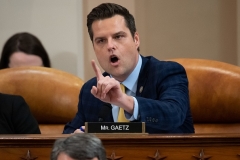 Representative Matt Gaetz (R-Fla.) is not the first lawmaker to deny sex scandal allegations, as he did Tuesday night, rejecting a New York Times report as a smear and demonstrably false. (Photo by SAUL LOEB/POOL/AFP via Getty Images)

(CNSNews.com) - Rep. Matt Gaetz (R-Fla.), an outspoken conservative and a supporter of President Donald Trump, says he's being smeared by The New York Times and extorted by a former Justice Department official over what he calls a false allegation of sex trafficking.

"It is a horrible allegation and it is a lie," Gaetz told Fox News's Tucker Carlson Tuesday night:

The New York Times is running a story that I have traveled with a 17-year-old woman, and that is verifiably false. People can look at my travel records and see that that is not the case.

What is happening is an extortion of me and my family involving a former Department of Justice official. On March 16th, my father got a text message demanding a meeting, wherein a person demanded $25 million in exchange for making horrible sex trafficking allegations against me go away.

Tonight, I am demanding that the Department of Justice and the F.B.I. release the audio recordings that were made under their supervision and at their direction, which will prove my innocence and it will show that these allegations aren't true. They're merely intended to try to bleed my family out of money.

And this former Department of Justice official tomorrow was supposed to be contacted by my father so that specific instructions could be given regarding the wiring of $4.5 million as a down payment on this bribe.

I don't think it's a coincidence that tonight, somehow "The New York Times" is leaking this information, smearing me and ruining the investigation that would likely result in one of the former colleagues of the current D.O.J. being brought to justice for trying to extort me and my family.

I know that there was a demand for money in exchange for a commitment that he could make this investigation go away, along with his co-conspirators. They even claimed to have specific connections inside the Biden White House.

Now, I don't know if that's true. They were promising that Joe Biden would pardon me. Obviously, I don't need a pardon. I'm not seeking a pardon. I've not done anything improper or wrong, but what I am troubled by is the real motivation for all of this.

You know just tonight, Ted Lieu, a Democrat is calling on me to be removed from the House Judiciary Committee. And I believe we are in an era of our politics now, Tucker, where people are smeared to try to take them out of the conversation.

But it did not happen. It is not true. And the fact that it is the basis of this attempt to extort my family tell us a lot. And if the F.B.I. and Department of Justice will release the tapes that they are in possession of, the American people will see what is really going on.

Gaetz mentioned that he and Tucker Carlson "went to dinner about two years ago."

"Your wife was there, and I brought a friend of mine, you'll remember her, and she was actually threatened by the F.B.I., told that if she wouldn't cop to the fact that somehow I was involved in some pay-for-play scheme, that she could face trouble.

"And so I do believe that there are people at the Department of Justice who are trying to smear me, you know, providing for flights and hotel rooms for people that you're dating, who are of legal age, is not a crime. And I'm just troubled that the lack of any sort of legitimate investigation into me would then permute -- would then convert into this extortion attempt."

Carlson told Gaetz: "I don't remember the woman you're speaking of or the context at all, honestly, but I would like to know who -- so they're saying there is a 17-year-old girl who you had a relationship with? Is that true? And who is this girl? What are they talking about, The New York Times?"

"The person doesn't exist," Gaetz responded. "I have not had a relationship with a 17-year-old. That is totally false. The allegation, as I read it in The New York Times, is that I've traveled with some 17-year-old in some relationship. That is false and records will bear that out to be false."

Gaetz said he found out on March 16 that he was an "extortion" target, "when people were, you know, talking about a minor, and that there were pictures of me with child prostitutes. That's obviously false. There will be no such pictures because no such thing happened. But really, on March 16th was when this got going from the extortion standpoint."

Gaetz said the extortion money was supposed to be transferred on Wednesday, thus implicating the former DOJ official. "But that's obviously not going to happen tomorrow, because The New York Times story was leaked in order to quell that investigative effort," he said.

"So here's what needs to happen next," Gaetz continued:

"The F.B.I. and the Department of Justice must release the tapes that are in their possession that were done at their direction. Those tapes will show that I am innocent, and that the whole concept of sex charges against me was really just a way to try to bleed my family out of money and probably smear my name, because I am a well-known outspoken conservative, and I guess that's out of style in a lot of parts of the country right now."

According to the New York Times report:

Representative Matt Gaetz, Republican of Florida and a close ally of former President Donald J. Trump, is being investigated by the Justice Department over whether he had a sexual relationship with a 17-year-old and paid for her to travel with him, according to three people briefed on the matter.

Investigators are examining whether Mr. Gaetz violated federal sex trafficking laws, the people said. A variety of federal statutes make it illegal to induce someone under 18 to travel over state lines to engage in sex in exchange for money or something of value. The Justice Department regularly prosecutes such cases, and offenders often receive severe sentences.

It was not clear how Mr. Gaetz met the girl, believed to be 17 at the time of encounters about two years ago that investigators are scrutinizing, according to two of the people.

The investigation was opened in the final months of the Trump administration under Attorney General William P. Barr, the two people said. Given Mr. Gaetz’s national profile, senior Justice Department officials in Washington — including some appointed by Mr. Trump — were notified of the investigation, the people said.

The report also said, "No charges have been brought against Mr. Gaetz, and the extent of his criminal exposure is unclear."

And it explained that the allegation against Gaetz is part of a broader probe in to a "political ally of his, a local official in Florida," who has been indicted on charges including sex trafficking of a child and paying people, including an underage girl, in exchange for sex.