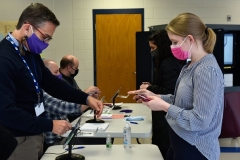 A voter shows ID at the polls, as required for in-person voting in Georgia, on January 5, 2021.

(CNSNews.com) - Democrats are pushing for passage of a bill that would allow the federal government to set the rules -- Democrat rules -- for elections that are now run by states and local jurisdictions.

The House Armed Services Committee was wondering whether we needed to check the social media accounts of our service members to see if they might have one day, liked a Pepe the Frog meme or posted on a forum where somebody else might have posted offensive conduct.

So, cancel culture is alive and well. It is coming for our military. And HR-1 will allow Democrats to be able to forever centralize power and weaponize the cancel culture against our fellow Americans.

Joining Gaetz on Sean Hannity's show, Rep. Jim Jordan (R-Ohio) said, "Whatever it takes to stop this bill needs to happen. Mitch McConnell was clear a week and a half ago when he gave the speech and said, we will basically shut down the Senate if you're going to proceed and do away with a filibuster and move to pass HR-1. It’s that dangerous."

At a hearing of the Senate Rules Committee on Wednesday, Senate Minority Leader Mitch McConnell (R-Ky.) refuted Democrat arguments that Republicans are trying to suppress the vote. He outlined the dangers contained in the Democrats’ HR-1 power grab:

"States are not engaging in trying to suppress voters whatsoever. This is clearly an effort by one party to rewrite the rules of our political system…This legislation would forcibly rewrite the election laws of all 50 states from here in Washington.”

McConnell listed some of the Republicans’ major objections to the bill:

Popular policies like voter ID requirements would be banned, unless states neutered them with loopholes. Meanwhile, unpopular and absurd practices like ballot harvesting, where paid political operatives can show up carrying stacks of other people’s ballots would not just be allowed, it would be mandatory.

Washington would mandate that every state and county in America adopt same-day voter registration with minimal safeguards, but it would make it incredibly difficult for states and counties to conduct routine voter list maintenance like removing dead people or voters who don’t live there any longer.

Then there’s the whole question of political speech. Refereeing campaigns and policing speech are sensitive tasks. Appropriately, the FEC was designed after Watergate to be bi-partisan an even split, three to three. So let me dwell on that for a minute. After Watergate, my party, the Republican Party, was just about wiped out. The overwhelming Democratic majorities could have done anything they wanted to.

It never occurred to them that the Federal Election Commission, set up to police how we run campaigns, would be made a partisan entity. They could have done it then. Now we’re in a 50/50 Senate and a narrow majority in the House. And this audacious move wants to turn the judge of our democratic process into a partisan prosecutor? Talk about shame. If anybody ought to be feeling any shame around here, it’s turning the FEC into a partisan prosecutor, the majority controlled by the president’s party to harass and intimidate the other side.

McConnell pointed to a Democrat effort in the House right now to overturn the certified election of Iowa Republican Rep. Miller-Meeks:

Of course, the Constitution gives the House to determine who will sit there. That doesn’t mean they should go against everything they were preaching in the last two months about the sanctity of state certification and simply ram through someone who lost the election, according to officials in Iowa. ...That’s what happens when you let partisan bodies regulate elections. And that is certainly not what we need at the FEC. And that’s what among other things, you ought to be ashamed about.

This bill would also expand the scope of this newly partisan FEC. More power over more of American speech, more mandates for private groups to publicize their list of supporters. Associational privacy is a core liberty. It’s been championed heroically by organizations like the NAACP. This bill is such an attack on citizen’s privacy that even the left-wing ACLU opposes this bill.

These are big picture problems. But on a practical level, even if you disagree with everything I just said, the fact is, as Senator Blunt pointed out, this legislation is just not ready for prime time. It’s an invitation to chaos.

Sen. Blunt said SR-1 would allow "a federal takeover of the election process."

S-1 would force a single partisan view of elections on more than 10,000 jurisdictions around the country. State and local election administrators would be forced to change how they register voters and which voting systems they can use, how they handle early voting and absentee ballots, and how they maintain their voter list.

It would mandate unlimited ballot harvesting, a process where one person collects and submits an unlimited number of ballots, a system ripe for abuse as Democrats in the House of Representatives contended when they refused the election of a Republican from North Carolina because of ballot harvesting.

This bill would also require states to allow felons to vote in federal elections, and it does allow states that don’t want to do that to have a separate set of voter registration lists, one for federal elections and one for other elections.

What’s more, this bill would require all of these changes to be made very quickly, so quickly that should this legislation be enacted, chaos will reign in the next election and voters will have less faith in the integrity of their elections than they currently do.

S1’s path of destruction doesn’t stop at election administration. It would result in a partisan Federal Election Commission, a commission that is designed to be half of one party and half of the other, federal monies would flow into campaign coffers at the rate of $6, six federal dollars for every dollar raised up to $200. $1,200 from the Treasury for $200 raised would be particularly helpful to candidates when they can pay themselves a salary to campaign as this bill also allows.

“These are only a few of the things that people need to be aware of," Blunt warned.