Rep. Banks: FBI Raid on Trump's Home 'Unifies Us in Our Outrage to Fight Back' 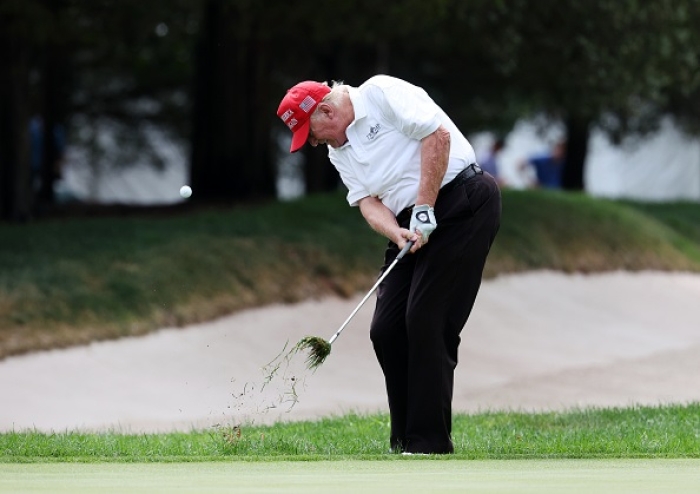 Former President Donald Trump was at his Bedminster, N.J. golf club when the FBI raiding his Palm Beach home on Monday. (Photo by Jonathan Ferrey/LIV Golf via Getty Images)

(CNSNews.com) - Republican lawmakers who met with President Trump at his Bedminster, N.J. golf club Tuesday night say they're fired up, their constituents are fired up, and Trump is fired up following the FBI raid on Trump's Mar-a-Lago home.

"The American people get it, they know what is going on here, and that is why the outrage is larger than I have ever felt before," said Rep. Jim Banks (R-Ind.) who was among the group meeting with Trump in Bedminster.

"It unifies us in our outrage to fight back, and if anything, it paves the way for Donald Trump to unify the party once again and run for president.

"I really believe if he gets out and hits the campaign trail, he is going to fire up Republicans and non-traditional Republicans to come out to the polls in November to fight back against the corruption of this administration, what they've done to tear America apart, to weaponize the Department of Justice in such an un-American way.

"To go after the political, the chief and primary political opponent of the current president of the United States is something we have never seen before in American history, and that outrage is going to lead to a massive turnout of Americans who are going to say, we are not going to take it anymore. We are going to take back our country from Joe Biden, the radical Democrats and those who would abuse their power in such a way."

Banks said Trump is "not deterred, he's not fazed at all" by the FBI raid, which may have been triggered by a documents dispute. Neither the Justice Department nor the FBI has explained why such an unprecedented and heavy-handed search was necessary, if the goal was to remove documents that properly belong in the National Archives.

Press reports say the search warrant involved presidential records, some of them classified, being stored at Trump's home.

"The House Republicans, there were a dozen of us that visited with President Trump tonight," Banks said.

"We wanted to go and tell President Trump we stand with him. And when Kevin McCarthy is speaker of the House, Jim Jordan will be the right man at the right time in the right place, as chairman of the House Judiciary Committee, to hold the Department of Justice accountable for these actions.

"House Republicans are unified more than ever before to fight alongside President Trump to save this country.

"Everyone in the room encouraged President Trump to run for president again, and the sooner he gets out and starts campaigning, the better.

“He helps Republicans in the midterm elections to get out his voters, to support a growing, a historic Republican majority over the next two years that (will pave) the way for winning back the White House in 2024. We have to get it done."