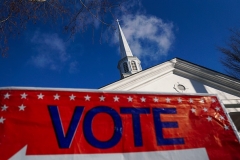 A polling station at the Zion Baptist Church in Marietta, Georgia. (Photo by SANDY HUFFAKER/AFP via Getty Images)

(CNSNews.com) - Once upon a time, not so long ago, Americans went to the polls on Election Day, unless they had a valid excuse to vote absentee.

But in these politically polarized times, a single day of voting would be unthinkable; and "voter suppression" and "voter subversion" are now the cudgels Democrats are using in an attempt to set federal election rules that would, in some cases, weaken state voting laws.

In Georgia today, President Joe Biden will argue that Georgia's election integrity law is intended to prevent black citizens and others from voting or to "subvert" their vote once it is cast.

State officials say that is not the case at all.

At the White House on Monday, spokeswoman Jen Psaki said Biden's plan is "to sign voting rights legislation into law," even if that means abolishing the Senate filibuster to do it. Only Democrats support the two voting bills that would impose one-size-fits-all federal rules on the states.

"But let me give you a little bit of a preview of what people can expect to hear from him (Biden) tomorrow," Psaki told reporters on Monday:

I would just note that the backdrop of where he's going is vitally important here, as we were planning the trip, and it's in a place with profound civil rights history...The president will forcefully advocate for protecting the most bedrock American rights, the right to vote and have your voice counted in a free, fair, and secure election that is not tainted -- tainted -- tainted by partisan manipulation.

He'll make clear in the former district of the late Congressman John Lewis that the only way to do that are for the Senate to pass the Freedom to Vote Act and the John Lewis Voting Rights Advancement Act.

He will follow his remarks from last week on the anniversary of January 6, where he did touch on voting rights and that fundamental importance of protecting that right when an unprecedented insurrection sought to violence, finally overturn the outcome of what the Trump administration's top election security officials confirmed was the most secure election in history by saying that he will stand in the breach and keep fighting for the soul of America.

And I'll also describe this as one of the rare moments in a country's history when time stops and the essential is immediately ripped away from the trivial, and that we have to ensure January 6 doesn't mark the end of democracy but the beginning of a renaissance for our democracy, where we stand up for the right to vote and have that vote counted fairly, not undermined by partisans afraid of who you voted for or try to...reverse an outcome.

I would also note one other piece I think you can -- you will hear more from him on tomorrow is he's quite focused on how ensuring the American people understand what is at stake here. Sometimes, we all are -- we all shorthand legislation or shorthand what we're talking about.

And protecting the fundamental right to vote means he's going to also talk about what the changes have meant in states like Georgia across the country, what -- what is at stake for -- for voters in Georgia and other states across the country, and -- and why this is so imperative it move forward.

Georgia Gov. Brian Kemp has noted that the Georgia law actually increases the number of early voting days, including weekends, in Georgia.

"We've got many more opportunities for people to vote early than President Biden's own State of Delaware and a lot of other states where the Democrats are in control. They're just not being truthful to people," Kemp said in July.

Georgia has a no-excuse absentee voting policy, but critics oppose a provision requiring photo ID (furnished free of charge) to be included with absentee ballots.

Critics also object to limitations on the number of ballot drop boxes and the hours they are available. Drop boxes are a COVID pandemic feature that are here to stay. Georgia law says all counties must have at least one ballot drop box, but that's not enough, Democrats insist.

Democrats are particularly critical of a provision in the law that allows the State Election Board to "suspend county or municipal superintendents and appoint an individual to serve as the temporary superintendent in a jurisdiction."

The person appointed as the "temporary superintendent" is authorized to "make all personnel decisions related to any employees of the jurisdiction," including the director of elections, the election supervisor, and all poll officers.”

It is this provision that forms the basis of Biden's/Democrats' "voter subversion" argument.