Psaki: 'No,' We Won't Say Who Is Visiting the President in Delaware 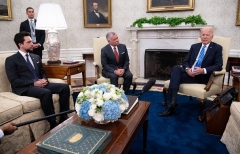 We know who visits President Joe Biden at the White House (in this photo, the king and crown prince of Jordan), but who's visiting him in Delaware? (Photo by SAUL LOEB/AFP via Getty Images)

(CNSNews.com) - President Biden spends many weekends at his home in Delaware, but does he have visitors when he's there, and if so, who are they?

The White House on Wednesday refused to say.

"No, I can confirm we are not going to be providing information about the comings and goings of the president's grandchildren or people visiting him in Delaware," White House spokeswoman Jen Psaki said.

She was responding to a question from a reporter, who noted that Biden has been to Delaware 17 times since becoming president. "It's soon going to be 18 to 19 times over the past six months. I want to know how visits from visitors and from family members with potential conflicts of interest are being treated for the purposes of White House visitors log disclosure."

The Biden administration announced in May, that in the spirit of transparency, it would be "the first administration to post visitor logs from its first full year in office. Visitor log disclosures will occur on a monthly basis."

According to that May 7 news release: "These logs give the public a look into the visitors entering and exiting the White House campus for appointments, tours, and official business — making good on President Biden’s commitment to restore integrity, transparency, and trust in government."

So far, the White House Visitor Log, arranged by date, contains 4,188 entries. But as Psaki said, there is no visitor log for Biden’s frequent weekend escapes from the White House.

Tom Fitton, president of Judicial Watch, told The New York Post that Biden is breaking his promise of transparency:

"If they’re going to take the position that this information should be public, what are they hiding when it comes to visiting his home?" Fitton wondered. "The presidency doesn’t stop when he’s visiting Delaware...He is presumably doing work. So the public has an interest in knowing who is visiting him there."

In 2009, Judicial Watch sued the Obama Administration to obtain the president's visitor logs, and in 2013, then-federal appeals court Judge Merrick Garland ruled that that the president’s constitutional right to confidential communications means that the Freedom of Information Act (FOIA) doesn’t apply to visitor logs held by the Secret Service.