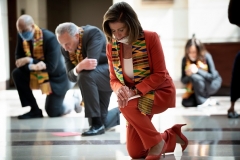 Speaker of the House Nancy Pelosi (D-Calif.) joins other Democrats in a moment of silence for George Floyd and other victims of police brutality on June 8, 2020. (Photo by BRENDAN SMIALOWSKI/AFP via Getty Images)

(CNSNews.com) - House Speaker Nancy Pelosi (D-Calif.) on Thursday remarked on the "injustice of the Hyde Amendment," which bars the use of federal funds to pay for abortion except in cases of rape, incest or when the mother's life is endangered by the pregnancy.

Some Democrats are eager to get rid of the amendment, which is passed every year as a rider to the Health and Human Services appropriations bill.

"Well, let me just say this about the Hyde amendment," Pelosi told a news conference in response to a question on Thursday.

"For 40 years -- since I was not even in Congress, I have been dismayed by the injustice of the Hyde Amendment. It's just discriminates against poor women, and largely they are women of color."

The reporter had asked Pelosi about a recent push to remove the Hyde amendment in future spending bills.

According to a July 2 Politico report:

House Democrats will keep a decades-old ban on government funding for abortion in spending bills this year, dodging an election-year clash with Republicans and disappointing liberal lawmakers and activists.

Senior Democrats had been considering scrapping the so-called Hyde amendment, which has restricted federal funding for most abortion services since 1976, amid a hard push from the party’s left flank.

But Democratic leaders ultimately decided to keep the language to avoid a brutal fight they were unlikely to win with a GOP-led Senate, according to multiple aides and lawmakers. Speaker Nancy Pelosi and other Democrats ultimately agreed it wasn't the right time to make the push, with the party potentially just one election away from controlling the House, Senate and White House and able to enact more sweeping policy changes.

Pelosi's pro-abortion stance is at odds with her Catholic faith, which she frequently mentions.

At her various news conferences, she often raises her belief in the power of prayer (see below).

Nancy Pelosi: “As Isaiah Says, ‘For the Lord Will Have a Day of Reckoning…Woe to Those Who Make Unjust Laws’

Pelosi: ‘I Am Always Advocating Prayer. I Am a Big Believer in Prayer’

Pelosi: ‘We Don’t Have a Vaccine and…Pray That Science Will Be an Answer to Our Prayers in That Regard’

Nancy Pelosi: ‘I Always Pray for the President’

Nancy Pelosi: ‘Our Prayers Are With Those Who Are Diagnosed’

Nancy Pelosi: ‘We Praise Them. We Pray For Them. We Say All of Those Things.’

Pelosi Urges Colleagues: ‘During This Holy Season for People of Many Faiths, Let Us Pray…’

Nancy Pelosi Retweets: ‘May We Use This Moment of Isolation to Pray as One Body’

Pelosi: ‘No, Mr. Vice President. You Make Me Sad Because You're a Person of Faith’

Pelosi: 'Why Don't We Begin With a Prayer'

Nancy Pelosi Tells Stephen Colbert: ‘I Am Always a Believer in Prayer, as I Know You Are as Well’

Pelosi: ‘I Do Pray For [Trump] … It Doesn’t Bother Me What He Thinks About That’

Pelosi, After Provoking Trump, Urges Prayers for His 'Health'

Pelosi Says She's Praying for Trump's Presidency to Be Successful