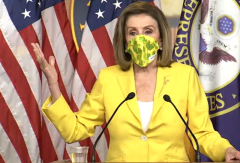 (CNSNews.com) - "Public health officials still encourage wearing masks indoors," House Speaker Nancy Pelosi (D-Calif.) told a news conference on Thursday, when she was asked why a such small group of lawmakers, all presumably vaccinated and certainly socially distanced in the sparsely populated chamber, nevertheless kept their face masks on.

President Trump on Thursday commented, "It doesn't show very much confidence" in the vaccines for members of Congress to wear masks in such a restricted setting.

Both House Speaker Nancy Pelosi and Vice President Kamala Harris kept their masks on while sitting behind President Joe Biden. Biden entered the chamber wearing a mask, but he took it off to speak.

On Thursday, Pelosi explained the mask-wearing.

"We are guided by the Capitol attending physician and the sergeant at arms, but the science demands how we can -- why we have masks on still," she said:

As you rightly point out, with more vaccinations, we should be able to have a shorter period of time for voting, so that we don't -- if we're all vaccinated, still with a mask inside, but nonetheless.

Perhaps when we are speaking would be a time when we could, as you did, take down the mask, but so far, that's not what we can do.

So here's the thing. We cannot require someone to be vaccinated. That's just not what we can do. It is a matter of privacy to know who is and who isn't. I can't go to the Capitol physician and say give me the names of the people who aren't vaccinated so I can go encourage them or make it known to others to encourage them to get vaccinated. So we can't do that.

But you would hope that science would guide them to protect themselves, their family members, and the good colleagues in the workplace to get vaccinated. And the sooner that that happens, the better for everything in terms of -- because all of the requirements that we had last night were not about security, by and large. That security issue is always there when the president of the United States is present.

Pelosi noted that normally, 1,600 people would have gathered in the room to hear the president speak, but only 204 were allowed in last night -- "because the Capitol physician insisted that that social distancing, that mask wearing all were necessary, so that we're not contributing to the spread of COVID, especially with the president of the United States there; also, in terms of the Congress of the United States.

"So If we could, but we can't, require vaccinations for the members, much less the American people -- some people want to say don't come into my store unless you're vaccinated, this or that, you'll cause commotion. But we don't have too much, I mean, there's some individuals who say, and I can't even -- I don't even know who they are, but if you say there are, that they don't want to social distance, they don't want to wear a mask. But that's incidental. It's not anybody important."

Pelosi estimated that about "75 percent" of lawmakers have been vaccinated. "But again, the physician cannot tell us (if they are) Democrats or Republicans or who. And that's right, we should be respecting people's privacy."

Pelosi said when Republicans ask her to shorten the time for votes, she tells them, "Well, tell your friends to get vaccinated, that would help. That would help a lot."